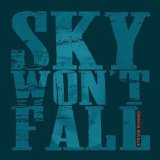 Scotland is not just one of the most enchanting parts of the United Kingdom but also a land that never ceases to surprise for the variety of music genres this place is able to gift the world with. It can be rock or pop or blues, that doesn't matter, because a true Scot will play any type of music straight from his heart and soul.

To be able to combine many different genres and make them work as sublimely as the Glaswegian Stevie Nimmo does on his brand new solo album, Sky Won't Fall, is a demonstration of true, sheer talent.

Recorded in just ten days, the album is the perfect introduction to Nimmo's personality and his versatility as a musician.

From the imperial attack of the opener Chains Of Hope, a true rock and roll firecracker, bouncing to the almost country-esque ballad Walk The Thin Line, to then buzzing to the sexy riffs of Nimmo's guitar on that wonderful slow blues that is Gambler's Roll, Sky Won't Fall is like a series of pyrotechnical fireworks that dazzle the listeners in every track of the album.

Nimmo's ability on guitar is well known among the blues/rock world but his singing style is perhaps the most sublime discovery on his new album. The Scottish artist showcases an incredible array of singing styles throughout the record, from the thunderous, powerful vocals on Roll The Dice Again to the deeply emotional and soulful delivery on the acoustic, closing tune Love You More Tonight.

It is well worth mentioning the great wall-of-sound that Craig Bacon on drums and Mat Beable on bass have helped to achieve on Sky Won't Fall, completing Nimmo's outstanding work on guitars and vocals.

2016 has hardly started and it has already gifted fans of blues, rock and blues/rock with some authentic masterpieces. Make some space for Sky Won't Fall on your CD rack, because Stevie Nimmo has pulled out of his magical music hat his best work so far.

Sky Won't Fall is out now on Manhaton Records