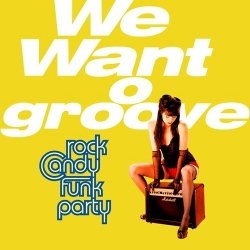 Those guest appearances permitted Bonamassa to escape the demands of a busy solo career, a chance to be "one of the guys."  Moreover, it seemed the ultimate excuse to step outside his comfort zone and explore his "home-stuff" more in-depth.  The end result: We Want Groove.

In summer 2012, five supremely talented musicians entered Tal Bergman's (producer, drummer) studio for the "sheer joy of making music."  Prepared with basic song ideas, Bergman says, "The concept of this record had everything do with interplay...Where everybody feeds off each other, reacts, and captures the moment." Similarly, Bonamassa says of the project, "Making this record was a great opportunity for me to do something I really enjoyed...I'm hoping to show people another side to me."

Note for note, We Want Groove is a nine track (eight originals and one cover) instrumental music time machine, which revisits the jazz-funk sound made popular in the 1970s and 1980s, when Jazz morphed into a new genre, one with a danceable rhythm, with its addition of a strong back beat (or groove), electrified sounds and use of synthesizers. I recall Herbie Hancock, Kool & The Gang and George Benson tunes featuring that upbeat, "feel good" dance swing.

From beginning to end, We Want Groove is delightfully rhythmic--a kaleidoscope of funk/jazz and rock melodies, wherein decades of stylistic influence are seamlessly fused in one setting. Music connoisseurs and newcomers alike will want to hear more from this supergroup.

Read the Track by Track review of We Want Groove here!