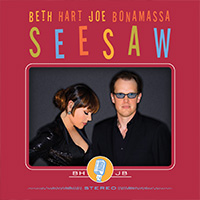 On their second collaboration, Beth Hart and Joe Bonamassa's interpretive intelligence shed new light on deep album cuts from some of musics most prized performers (Aretha Franklin, Tina Turner, Billy Holiday and Etta James). The duo joined forces in 2011 to record an album of soul classic covers on "Don't Explain". That side project was well recieved by music fans around the world, peaking at #3 on the Danish Charts. The highly anticipated SEESAW is currently holding the #1 spot.

“What’s so cool about these projects is that when Joe and Beth enter the studio, he comes in as a guitar player, and she comes in as a singer,” says Shirley.  “They’re getting together just to play fun music, sing some favorite songs, without the pressure of career issues they might have on solo projects.  The point is to pick up and celebrate songs that didn’t get their due in the day, and to pay homage to ones that were truly classics.  The vibe this time is more upbeat than on Don’t Explain, lots of big band horns,” says producer Kevin "Caveman" Shirley.

Beth Hart is known for her “raw” vocal prowess, often compared to Janis Joplin mainly because of her intensity. However, it is her jazz and gospel influence that stands out on every number here. It is evident she was born to sing, while blues-rock guitar sensation, Joe Bonamassa, was born to play six strings. Together, they're unstoppable.

"Miss Lady" (Buddy Miles), "Rhymes" (Al Green), and "Seesaw" (Don Covay), with its jarring beats and rhythyms, get the spirit jumping, feet stomping and soul grooving, the way a Rock 'n Soul revival show should. And the duo's rendition of Tina Turner's classic "Nutbush City Limits" is worth the price of $13.99, alone!

In support of both albums, Hart and Bonamassa are currently touring in the UK and Europe. The shows are being filmed for a concert DVD due out at an undisclosed future date.

Plus, there's a series of webisodes on the making of both Don't Explain and Seesaw. These are always fun to watch and packed with behind-the-scene tidbits. To view, please visit the artist's official Youtube channel. And be sure to check out their bios, get tour details and purchase merchandise at Hart and Bonamassa's official website.