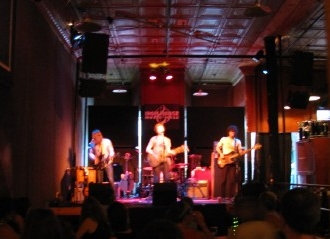 These Missouri gentlemen made no apologies and knew this crowd have heard nothing of their music until these moments. This rainy night in Northampton with a light crowd for a Monday did not stop them from giving this show their all. There was something about this band that reminded me of the folk ballads of Zeppelin, but I digress to Zeppelin so often, I discounted my own intuition. There was some deep storytelling going on with the lyrics in Caney Mountain. This song was gripping. The guitar and acapella voices kicked our Yankee keisters. People were looking around at each other, shocked, drawn in.

Finally, toward the end of the show, these talented men walked to the edge of the stage and sang an acapella version of The Gallis Pole/ "Hangman". The song which was originally recorded by Led Belly (1939) and later re-written by Led Zeppelin has deep roots in traditional folk.  Ha Ha Tonka's rendition of this classic was absolutely stunning. I would have paid the admission just to hear this one piece. Absolutely stunning. I am very impressed with the tenacious writing and the depth of talent with this band. I am definitely a follower !