You can find photos of the Boston Street Team at the Wang Theatre, Meet/Greet and Dinner here.

During the Street Team Dinner at Jacob Wirth's Restaurant in Boston, I sent around a notebook and pen, asking Street Team members to share their favorite memory of Joe.

Here is what they said:

From Ashely Flynn/Boston - Joe at the Baked Potato in L.A.

From Robert "Joe Junkie" Carder and Jen "Joe Junkette" Schoonover/Fort Wayne, Indiana - 49 shows !! Too hard to pick just one, but if we had to, it's the next time we see him !

From Karen S.- So far, seeing him for the first time on the PBS special and the DVD from the Royal Albert Hall. A Revelation! Hoping for more up close and personal moments!

From Chris Swistro - My favorite moment is the Guitar Center talk on Youtube where Joe talks about his approach to the slide ... the sound he makes reaches right into your gut. It's awesome! And he brings that magic to life in his shows !

From A Fan - Favorite Joe quote, "Walked out on stage and there are 2,000 Dads so I throw it back at them.

From Rich Adams/Manchester, NH - Meeting Joe at the Casino Ballroom and having him run through his rig with us was amazing ... met some great folks that day and made some great friends ... seems like I meet great people every time I got to a show.

From Mark Urich/Somerset, MA- Seeing him live for the first time, love his music, remember him from the 60 minutes feature when he was still 12 years old. Looking forward to a great show !

From Geri and Bob Fallice/Somerset, MA - Dream come true meeting this gentle genius ! I can't wait to experience him for the first time ! A great way to celebrate our 35th Wedding Anniversary !

Geri later sent in this review/response to the show:

To top that he is the most kind, considerate, caring gentleman you could ever find. He was gracious at the meet and greet and listened to everyone's words and commented appropriately. As I was walking toward him, he immediately pointed to the organza flower pin I was wearing just for this occasion. I had made the pin and used a pic of Joe and his Les Paul as the centerpiece! He loved it and went on to comment about it later to his manager and best friend, Roy Weisman. He graciously signed my pin, my CDs and a composite photo our Street Team leader had made up of all of our promo work. He personalized everyone's greeting, mine was Happy 35th... ( my hubby and I had told him earlier we were there to celebrate our 35th wedding anniversary) he has an amazing ability to make you feel you are the only important thing at that moment!!!

The manager of the Wang Theatre was in awe. Said he has seen and met hundreds of actors, singers, stars of every genre over the years, but has never seen anyone take the time to meet and greet and spend time with his fans before. He was as amazed as we were.

In person, Joe is shy, personable and so damn handsome!!!! Once he changes into his designer suit, dons his dark glasses and straps on one of his many guitars, he undergoes an incredible metamorphosis from shy young man, to a total rock king confidently in charge of the stage and all 3000 gap mouthed fans!!!!! We had been told that Joe always makes time for his fans again at the end of his concerts by his tour buses. How true that is. We lined up with about 40 folks at the buses and, sure as heck, he and the band came out the stage door and preceded to sign autographs and take pics until everyone was seen and spoken to. Yep, I got pics and autographs from Tal, Rick and Carmine too which I will treasure and when Joe saw Bob and I leaving he once again yelled, Happy 35th to us!!! Amazing...

Oh yeah, dinner with the other Boston StreetTeamers at the second oldest restaurant in Boston was GREAT too!!!! Highly recommend Jacob Wirth's Restaurant to anyone heading to Boston....but make certain to make reservations or you'll end up waiting for hours for the experience.One unforgetable evening!!!!

From Rick Beck via BBR fanpage - Well, I was about 4 feet from Joe when I shot the video from the Baked Potato. That night was just too special for words. Funk, Fusion Jazz, Blues, all in a super tiny bar that is legendary in Los Angeles. The Baked Potato has been the site of thousands of epic jams. Hollywood stars hang out there. It is just across the freeway from the studios. Joe jamming with his buddies. Dig the way Joe sits there at first trying to figure out what song Arlen is playing. It didn't take him long to get into the swing of things. BTW, every one of these musicians is a top pro in the LA area. How many bands would like to have Joe sit in? Welcome to the world of Bonaholics Bluebird. It is a happy and global community. The communion between fans is a very special thing. 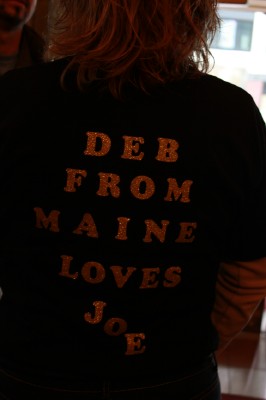 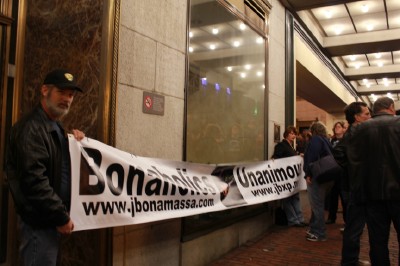 Support this artist by purchasing their music. Joe Bonamassa's catalog can be found here: