An Interview with Jason Anderson

Details
Written by Bluebird
Published: May 27 2012

An Interview with Jason Anderson. 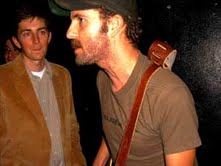 1) The first thing I noticed about your music was the intense use of imagery and metaphor. "the decaying burst of fireworks like a dandelion puff ... or a chandelier, comets and scissors ...ah ha ... sparks!"

But you use these images created in the listener to also describe emotions that are the theme of the song. "These floors are like sheet metal, under bare feet ..." Your feet get cold when you hear that line in Colonial Homes.

What inspires you to choose certain images and apply them this way?

My favorite writing--prose or poetry--is that which captures moments and feelings with great specificity and care. My most favorite writers--Louise Erdrich comes to mind immediately--are so intentional with their words. The small, keenly observed details with which they sculpt their sentences are simply delicious. It is with humility and caution that I try to follow their lead in my own attempts.

2) I've read that you are compared to Bruce Springsteen and there are similarities in your style. Yet, you are more raw in your songwriting and vocals than Bruce.

What do you say about this comparison?

Who better to be compared to than one of the greatest live performers of all time? I grew up on artists like U2 and Springsteen, who--especially in their early careers--brought a warm sense of inclusiveness and near-religious transcendence to their concerts.

3) You mentioned that you are influenced by Van Morrison's early works, which to me are blues and soul. We have many Van Morrison fans on our website and I am one of them. I love his poetic lyrics and run on works,Tir Na Nog, In the Garden, etc.

Can you say more about your influence from Van Morrison?

The passion and solemnity with which Van Morrison imbues his music with is intoxicating. Listen to Veedon Fleece, Into the Music, or the double-live LP It's Too Late to Stop Now, and you'll hear the sound of a young man overflowing with melody and raw, aching, joyous soul. To me, he is the original blue-collar, folk-jazz poet from whom Springsteen and others--like another of my favorites, Bob Seger--can be traced. It's incredible stuff. Timeless, haunting, and utterly stunning. He has inspired me in myriad ways.

4) Tell us about the new records!

My friend Jim and I are currently working on mixes for some songs the band recorded in January. Everyone is living in different parts of New England right now, which can make for slow going, but we're hoping to have at least an EP ready for our summer tour. In the meantime, I am still really excited about my most current release, a two-song single from a few months back. Anyone and everyone can download it for free here:

5) I ask everyone I interview this question. What do you want the next generation to 'get' about music?

Well, I'm certainly no sage, but I do have some thoughts on the anxiety that the ever-changing way in which music is consumed has seemed to brought on. Never forget how awesome it can be to get friends and strangers in a room for a few hours to sing and sweat and feel alive. Let the industry--the buying and selling of musical as a physical product--collapse; nothing can ever touch--or stand in substitute of--the concert experience. In those small, seemingly insignificant moments, we find ourselves truly present, aglow. And that's a glorious thing.

These next questions are from Glenn and Nico, long term fans who introduced me to Jason Anderson's music. Thank you for years and years of great music sharing.

Our traditional Boston New Year's Eve show is an awesome excuse to dress up. We always get fancy, and encourage attendees to do the same. Additionally, the band has played several weddings, two high school graduation parties, and a fiftieth birthday bash. So, in short, yes, many wonderful--and wonderfully varied--opportunities to literally rock a suit.

7) Do you watch the show Welcome Back Kotter?

I've never seen it, but I love The OC, which is also about high school.

Bluebirdreviews is on FACEBOOK. Join our music community for site updates, live shows and album reviews as well as daily song posts.

Support your favorite artist, like Jason Anderson, by purchasing their music.

Stay tuned for my next article on Jason Anderson which will be a review of Summer Style, an album of which he says he is "most proud of."