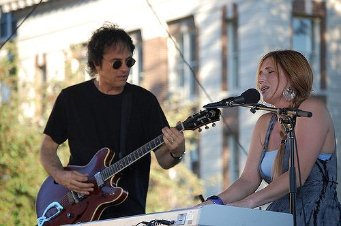 Bluebird: When you wrote, "Trust Yourself" which was the song picked up by Etta James, was the song recorded by her as you intended it to be? The arrangements of that song are really great! It has a great soul vibe, with country warmth, but is still a blues song. There are layers of production in that track. This seems to be a Kevin Bowe signature!

Kevin Bowe: I recommended my pal David Z to mix the record and the A&R guy at RCA said, "yeah, cool idea". After the record was done he called and actually thanked me for recommending David because the record came out so great. So the production didn't have anything to do with me beyond that bit. I think Etta and her band produced and recorded the record themselves, if I remember right they had a guitarist who was pretty much of a genius in that regard. Check out the little banjo lick on her version, that KILLS me, it's so cool. No one could have done it better.

Bluebird: I have had some debate on my website about what defines a blues 'legend'. Can you enlighten me, so I don't get into these arguments again?

Kevin Bowe: I have no idea. I never care what other people think of music, just what I think. I don't like to be influenced by the crowd, one way or the other. Obviously there are some artists that most people agree are legends but I just like what I like. That's a semantic argument though, with no payoff of truth gained, an argument about words. the only thing that matters is, who do you love?

Bluebird: Blues has historically been a regional thing, the sounds created were often related to the instruments available, the people, and economic situation, of the cities and towns where the artists lived and traveled, etc. What is your take on the blues scene in Minneapolis?

Kevin Bowe: I haven't really been that involved with the blues scene in Minneapolis in the last few years so I can't really say. I only get involved with music if it catches my attention, I kind of follow my ears in that regard. I like Minneapolis just fine but I'm not "loyal" to one scene over another. I was into Jonny Lang because he was interesting and we were writing together and it was fun, he had a great voice and a cool style on the guitar. If I met someone else here who caught my attention in that way I'd chase it down for sure, but it could be in Minneapolis or Siberia. Weather-wise it wouldn't make much difference in either case....

Bluebird: Who have we Northeasterners 'missed' from the blues music scene out your way? Name some gems we should discover.

Kevin Bowe: Gary Clark out of Texas is the latest thing that people are really hot on I think. Paul Westerberg put out a heavily blues influenced album a few years ago, can't remember if it was under his name or the "Grandpaboy" pseudonym but it had some cool stuff on it. There's a truly great slide guitarist from here named Paul Mayasich that blows my mind, he played that nasty slide guitar on "Just Restless" off my album, check that out. Bruce McCabe, a piano player/singer/songwriter has always been a favorite of mine too.

Bluebird: Who is a blues artist that you would still like to write for, record with, in the future? You can name more than one.

Kevin Bowe: Muddy, even if I had to die to go meet him. I tried Buddy Guy, had breakfast with him in Chicago but he was NOT having it. I gave it my best pitch but I could tell he wasn't biting! HA! Made me like him even more. Gary Clark. Robert Randolph. I would like working with just about anyone if the work turned out good. BB, now THAT would be cool. Hey, I'm not hard to get hold of, bring it on.