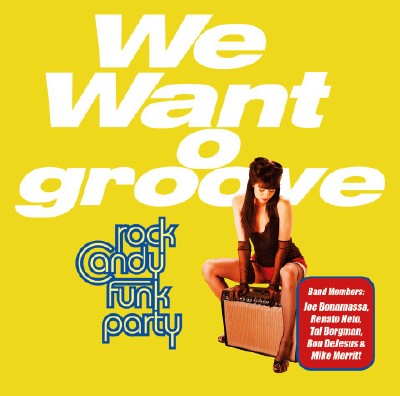 BR - Tal, We Want O Groove is a marvelous album that features 9 free-form great tracks, including Jimmy Smith's 1972 classic Root Down (And Get It). How difficult has it been building the record given the tight deadline you had?

TB - It wasn't difficult at all because we just went to the studio and we knew we had ten days to do it; we actually had no tracks written yet but I figured we were going to be able to write at least two tracks per day and we had two covers there and as soon as we started playing I knew we were gonna make it, after the first four bars we played together, because everybody was listening to one another.

BR - The record is definitely your brainchild. You and Ron DeJesus go a long way back, when in 2007 you recorded together Groove Vol.1. Do you reckon We Want O' Groove is the natural step ahead of that album?

TB - Oh, yes, for sure! Because what happen is that Ron and I always try and get together when we have time and we play for fun and that's how we came up with Groove Vol. 1; so We Want O' Groove is the extension of that concept because actually Joe Bonamassa really loved Groove Vol.1 so when we played in time and I asked Joe to come and sit in, that's how the whole concept got together, the whole thing. Groove Vol.1 was more a down-tempo type of fun project while this album has got more a live approach type of album.

BR - You have recorded with many artists in your career, Billy Idol, Simple Minds, Joe Zawinul, Rod Stewart among many. Does the project Rock Candy Funk Party define who you really are, musically speaking?

TB - That is a very good question! It definitely defines the kind of music that I love; who I am as a musician can be translated through many different styles but I really like to listen and play that kind of music so it's definitely a project that was a lot of fun for me to do.

BR - To work with 4 other musicians, all with their different personalities must have been challenging. How well did you get along?

TB - Oh, we got along amazingly! In reality, that is the real reason why this project was so much fun because everybody left their ego outside the door. So, because everybody is very good at what they do and they have their own color, nobody needed to show off their ability on the record, it was all about playing music, it was really a great time together.

BR - Tal, the album resembles a mash-up of the finest elements of Parliament Funkadelic, Weather Report, Herbie Hancock and Average White Band; was this the result of creating arrangements on the spot whilst recording?

TB - Due to the fact that we were aiming to reproduce the sound of the early 70's or early 80's, those sounds made us play in that sort of way and we chose to come up with stuff that doesn't have a lot of changes in tempo; so maybe that is what it resembles because it was recorded in the same way artists used to record at that time. The album was recorded 99 per cent live , which means that some of the tracks don't even have a clip track, just playing live sound with very little overdubs on percussion, that is it.

BR - Do you reckon that there will be a follow-up to We Want... or was this always going to be a one-off project?

TB - Oh, no, this project is going to be there for a while, we are definitely going to do another record next year and we are releasing in few days a live DVD/CD that was recorded at The Iridium in New York, which sums the highlights of three nights we played there. It is a real killer, really good!

BR - You have been Bonamassa's drummer since 2010. Have you enjoyed the "role reversal" in the RCFP project?

TB - I'm used to it - even when I am usually not playing with Joe (chuckles) that I felt that way doing the producer! It is a question for Joe, really.

BR - Tal, did you have a set idea of how you wanted We Want O' Groove to sound before starting the recording process?

TB - For sure! The sound was definitely a big part of how I wanted the record to sound alike. I set up the studio in a certain way, I tuned the drums in a certain way, I made sure the music was staying on course of that style so it was not going to get too "fusion-y" and rather stay on the funky side. So, in answer to your question, the picture was in my mind, perfectly, when we did it.

BR - Is it true that the conception of the RCFP project started on a napkin one evening you were up late?

TB - That is true. With Joe and I sitting on the bus and he actually drew it on a napkin and that is how it happened. It is a true story!

BR - Is the title of the record an homage to Miles Davis' We Want Miles? If so, was that album a true benchmark for the whole band?

TB - Well, it is definitely an homage and a total take of the cover and it was, in another way, because of the nature of the music, which it was improvisational; so we took it from there but it's not trying to resemble the way Miles was playing. But it is definitely an homage to that type of music that is not played in that style so much anymore. Not a lot of people play like that anymore, even those people that were used to do it are not follow that instinctive flow any longer. I love that way because it is an interplay between musicians that happens in real time.

BR - Is there a music style you have not fully explored yet in your splendid and eclectic career both as a drummer and a producer which you would love to give a shot to?

TB - Polka, maybe? Naah, I have done polka (chuckles). Let me think ... I have to think about that one... maybe Death Metal but I do not really want to do it (chuckles again). I still practice my double pedal over there, I don't know how to play double bass drums ... But it is not gonna happen in the near future for sure. 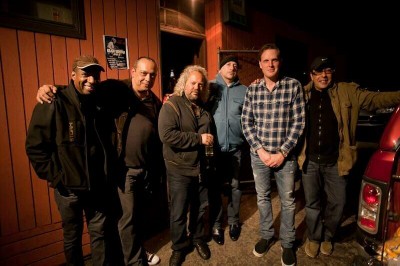 BR - The Italian fans really love We Want O' Groove; if there is going to be a tour for the forthcoming live album across Europe, would you consider including Italy on your Tour Map?

TB - I would love to! I would love to be in Italy regardless of touring. I love being there but it depends... That type of tour, with that type of line-up with everybody being busy with other stuff, so it is hard to find the time and the budget to go. If the record will sell well and the people will ask for more live shows then perhaps a proper tour may be arranged rather than sporadic gigs here and there.

Giovanni "Gio" Pilato is Italian music writer, who has been living in UK since 2002. With an enormous passion for music, and life in general, his interest in the communications began at 11 years old. He worked briefly for local radios in his youth and did a one-off radio show on 2007 on the glorious BBC 6 Music Radio station. Gio started his freelance journalist career in 2012, with Italian artists, and is now focusing on blues artists mainly. He was kind enough to publish his interview with blues woman, Beth Hart, reported from the Hampton Court in London, earlier this year.

To follow Gio Pilato and his all cool radio show, visit: