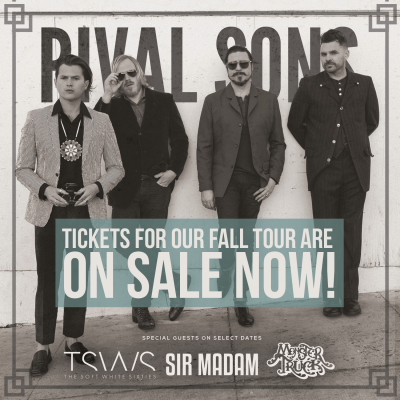 The band has been very busy with a new record release and global tour, but drummer, Michael Miley, had time to answer a few questions for us.

1. Tell me about your songwriting and recording process and what makes this new record, Great Western Valkyrie, different than your prior recordings, as well as to what is currently being played on the airwaves today.

“My immediate answer would be the addition of Dave Beste on bass. Our dynamic in the studio is directly proportional to the personal dynamics we have with each other as people, songwriters, and as musicians. We also added a lot of keyboards. And most of what you hear on radio is not the sound of 4 guys playing together in the studio. No loops, no auto tune, and no click tracks. “

2. How would you describe Rival Son’s music to people?

3. The music of Rival Sons is compared to numerous bands most specifically to Led Zeppelin. How do you feel about this, and what do you say to people?

“First, I say THANK YOU. haha. They’re one of the greatest rock bands ever. It makes sense, though. We have the same ingredients pretty much: white guys playing black American music really loud.

I do think it’s a lazy comparison if that is the only band you credit as our influence; that would just be hog wash. We’re four incredibly different dudes and I guarantee our iPods look very different.”

4. What image do you think Rival Sons’ music conveys?

“Jeez I don’t know.  It should convey stories being told and conjure images of real life over a visceral musical canvas of sound and rhythm.”

5. How do you want Rival Sons to be remembered?

“A band who worked their ass off for success.”

6. The band, as a collective unit, draws from multiple musical influences i.e. blues, jazz, rock, etc. Does the band have a favorite go-to song and why?   What makes it special/unique?

“I think “I’m Coming Home” by the Staple Singers. Their singing exudes perfect soul and grabs not only the heart strings, but the very depths of the soul strings. It’s perfect honesty at every note, chord, and rhythm.”

8. What was the first song the band played?

9. What are some of the bands fondest musical memories?

“Probably our days off! haha We try and do non-musical things on tour on our days off. That keeps us sane. We camp, cook, swim, and drive rally cars.”

“Vinyl always. But I’m really into staying current. I love Beats Music and Spotify as well, with their algorithmic playlists.”

12. What’s the worst thing that ever happened during a performance?

“People standing in the front row filming with their smart phones, song after song.”

13. Some bands have a prayer circle, some do a shot of tequila…Is there anything before a performance that Rival Sons does to bring on the juju?

“Ya we gather up and say a few things; helps connect our power crystals.”

14. How do you balance your music with other obligations - mate, children? And, how do they feel about you being away on the road?

“It’s the hardest thing in the world. The only thing I can compare it with is maybe the way military men, for thousands of years, have had to leave their loved ones for long periods of time. It’s tragic. But we aren’t putting our lives on the line; I can’t even imagine that. But I love being home and I love being on the road; so life is a constant tight rope. The balance for me comes from spiritual life."

Blue Bird Reviews and Stephanie want to say, THANK YOU MIKE MILEY for taking time out of your busy day to answer questions for us.

Jam with the Sons:

RIVAL SONS is up for Album of the Year with Classic Rock Magazine Awards on November 4th! Help the band out and vote here: http://awards.classicrock.teamrock.com/

With the latest studio recording GREAT WESTERN VALKYRIE released, the first single Open My Eyes spent 4 weeks at number one on Canadian Rock radio and has been climbing the charts here in the States since its release.  Show your support and get RIVAL SONS music here on iTunes:   https://itunes.apple.com/us/album/great-western-valkyrie/id840442440

Much to the delight of fans everywhere, RIVAL SONS has embarked on a US/European tour. 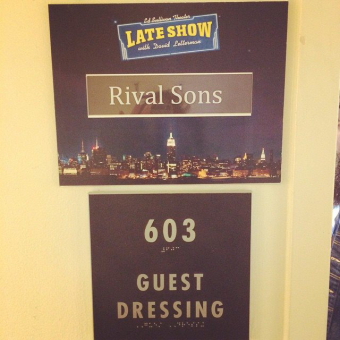 The band will also be on the Late Show with David Letterman Thursday, October 9th.

STAY TUNED TO BBR:   A review of the SOLD OUT Boston show at Brighton Music Hall will be up-n-coming.