Let The Music Play - An Interview To Thorbjorn Risager

2014 has been one of those years that will remain forever in the minds and hearts of Thorbjorn Risager and The Black Tornado. Universally acclaimed as one of the top album of 2014 by half of the media world, Too Many Roads is just one of those album that get inside your skin from the first listen for its beauty. The singer/songwriter Thorbjorn Risager, has kindly accepted to discuss with Bluebirdreviews what this album means for him personally and what the future has installed for them as a collective.

GGP - Too Many Roads is an album that has trajected the name of the band in the Olympus of the music scene worldwide. How much has it surprised you, or not maybe, the huge, positive outcome of the record from a selling prospect and from music magazines or music media in general around the globe?

TR - The truth is that we were very surprised on how well the album did, when it was released. We were very happy about the album but we never imagined that the album would attract the attention of so many people and media in general. The media must have done over a hundred of reviews of the album, since its release and interviews with us about the album, which was a very pleasant surprise for us. Our previous albums never received that much attention by fans and media in such scale, therefore this album is a giant leap for us.

GGP - Producing the album yourselves as a collective for the first time has been a brave move. How difficult has been for you and the band to run the project completely on your own?

TR - Actually, it turned out to be not that difficult at all. Once we finished the recording process, we were so happy about the outcome that we immediately had the feeling we had recorded something special, as it then turned to be. I like to think that such positive outcome is also due to the fact that on this album, we have decided to go solo, without a producer. We followed everything through, instead of leaving the responsibility to a producer to select and choose what then ends up on a record. As main men on the production side of this album, there was me and our bass player Soren and that was great fun. I was mainly focusing on musical arrangements while Soren concentrated more on the aspects of the sound. We had an excellent Team Work and by doing things on our own, we also saved a lot of money.

GGP - The recording process of each of your record must be surely intriguing. Beside you being the main songwriter, how much musical input each band member brings, in deciding the music direction on each individual track?

TR - That is a very interesting question. From a musical point of view, as I was saying before, our bass player Soren has always a lot of good ideas on each track we record. We all listen to his ideas and decide then which is the one that could be applied on each song. Sometimes, when I write a new tune, I record it and send it to each member of the band. The band would then play each their instruments, following their instinct and the way that particular song sounds to each of them. This would happen, normally, a couple of days before we enter the studio and rehearse the songs. Once we are all together in the studio, though, things may go through different musical tangents and we spend more hours rehearsing. This is a way of working we often apply before recording a new album but, as I said before, Soren is definitely the one that comes up with bags of ideas, even at the last minute. It is funny, sometimes, to think that the bass player in a band is always the one that has got thousand of ideas and our band makes no exception!

GGP - Scandinavia is a part of the world that has grown a lot in loving blues in the last 15-20 years. Does the love for this genre, in your opinion, come from values that blues carries with, which may reflect the core values of Scandinavian people too or is there any other reason behind this deep connection?

TR - Difficult to say if there is a real connection, in my opinion, as a Scandinavian person. The funny thing is that, very often, there is this saying that Scandinavian people are a bit depressed but I do not think, not even for a second, that this has got anything to do with the blues or whether there is a special bond between this part of the world and the genre. We are just what we are. I can just guess that many here might feel some sort of connection but it is something more individual, rather than a national thing. I really have not got an answer to that.

GGP - Thorbjorn, Too Many Roads is an album in which relationships between men and women seem to be the centrepiece of the whole project. How easy was to put yourself in the shoes of a woman's mind, when you wrote Red, Hot & Blue?

TR - Actually, I wrote that song from the prospective of my girlfriend. In that sense, it wasn't that difficult because I have known her for many years, now. Due to the special bond we have and always had, it wasn't really tricky for me to write that particular song.

GGP - The success of your band has taken you to many countries, I believe 17 or even more. When will the Southern Europe and the American audience have the opportunity of seeing you and the band performing in those countries?

TR - Hopefully very soon. We would absolutely love to go in countries such as Italy or Spain. But from a logistic point of view, it is not easy for us to plan gigs over there. We toured a lot in Germany for the last 3-4 years, where we have a very solid fan base and big audiences coming to our concerts. Given the short distance from Denmark, to have such great audiences in Germany is a great plus factor for us. It is very easy for us to go there and tour the whole country and schedule a proper tour. We really hope to tour Southern Europe soon. We are aware that there is a very good blues scene over there. If not this year, we would hope at least this might happen next year but we do want to go there and play, definitely. USA is one of those dreams we hope to achieve very soon too. That is the place where all our music heroes come from, therefore that would be a massive dream to fulfil for us, hopefully, one day.

GGP - W.C. Hardy, a famous blues composer and musician, once defined his music as the sound of a sinner on Revival Day. How does Thorbjorn Risager define HIS music instead?

TR - That is a difficult question. We tend to play quite a broad variety of genres, our music recipe gets its ingredients from different styles of music. To define our style is difficult, purely because it's all depending what type of song will come out the minute I sit down and start writing a new song. It may be a soul kind of song (Ray Charles is one of my all-time favourite artists), or a jazz, or a rock one, who knows. I think that, a lesson we learned through experience, as artists, is to follow our instinct about how a song should sound like, without any limit. In the past, our style was very much jazz orientated while now, I would call it more a blues/rock kind of style, with added elements from other music roots. And through the music style we play, we also like the fact, especially when we play live, to be able to create some positive vibes, a true bond between us, as a band, and the crowd. We want our fans to come back home thinking of our gigs as a moment of joy and we hope we are able to achieve most times.

TR - Myself and the band have been thinking so much, through the years, about trying to find an easy name for our fans to pronounce and I think we finally nailed it! (chuckles). For this last album we finally did so. We managed to find the right name and we are all happy about it. There is also another reason about trying to give the band a proper name. At the time we made Too Many Roads, I had planned to take quite some time off in Greenland with my family but the band wanted to keep touring, even in my absence. Given the fact they couldn't call themselves Thorbjorn Risager Band without me being around, at least by having their own identity, as a band, they could have had the chance of touring with somebody else, while I was away, or simply touring on their own, by calling themselves The Black Tornado. Due to the fact that my partner is a doctor and she loves to do some work in Greenland, it might be possible in future I may need to take chunks of time off music and be with her over there. At least, though, The Black Tornado can continue to play music on their own having their own identity, as a collective. 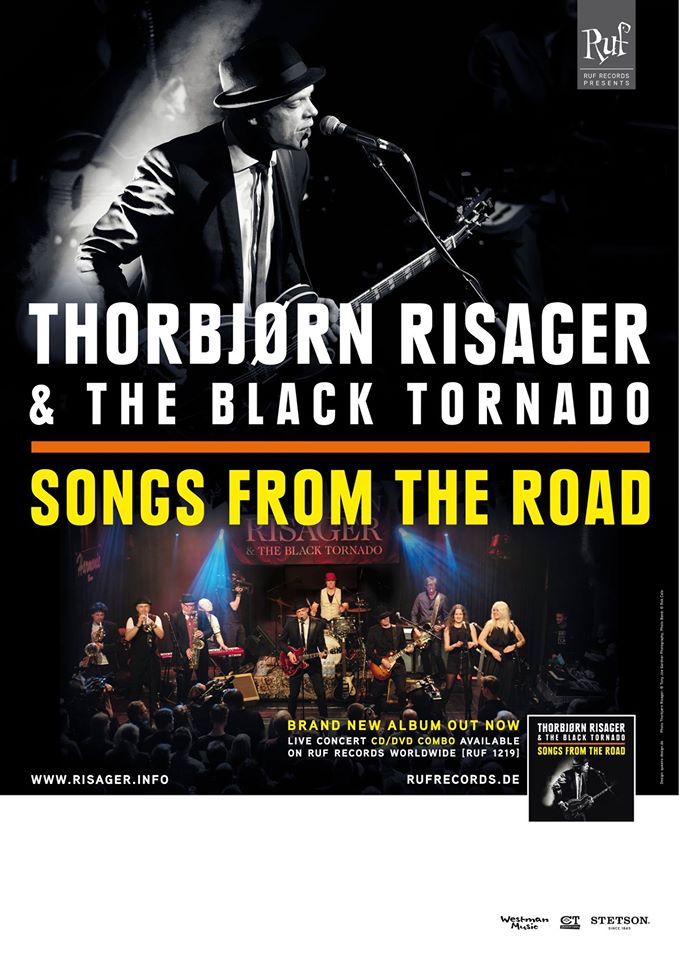 GGP - 2015 marks 10 years since you released your first album. Is there any surprise installed for your fans to commemorate such an important event?

TR - Well, we are certainly celebrating this important event in our career in the best way possible, which is releasing a new live CD/DVD called Songs From The Road. The mixing sounds fabulous and we are very pleased on the outcome. Certainly, the live album will be unveiled in Copenhagen, where our roots are. The band has been actually existing for 12 years but, as you rightly said, our first record was released back in 2005. And that was the same time in which we met our manager as well, so, in some ways, it will be a double celebration!

TR - Music is my whole life. The blues music, in particular, it has been always part of my life and will always be. I make a living out of music by writing it, playing it, singing it.. I live and breath music every day and I guess that I wouldn't be able to describe my life without music being part of it.

GGP - One part soul, one part blues, one part funk, one part rock. How should we name the music cocktail generated by Thornbjorn Risager & The Black Tornado?

TR - Well, to me, the core of our music remains the blues. I remember somebody from the Media World calling us Indie Blues, when Too Many Roads was released, although I don't subscribe entirely to that point of view. If I should, though, make up a cocktail name for our music, I think I would call it Danish Cosmopolitan. But fundamentally, let's just let the music doing the talk.