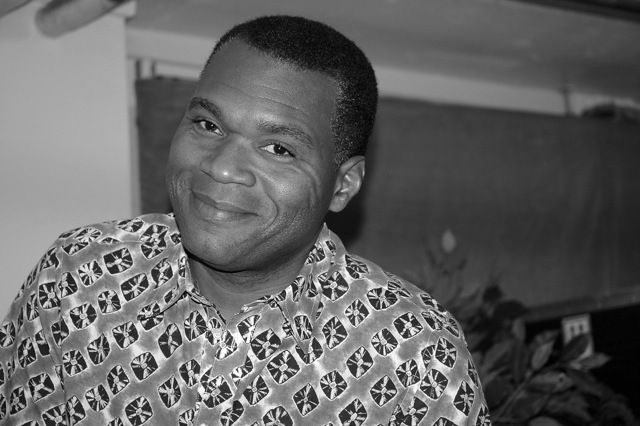 There is nothing more refreshing than talking to somebody that has seen and lived the last 4 decades of music on his own skin. It is almost like an art lesson, in many ways. Robert Cray has recorded many great songs in his career, played with the elite of the music establishment and still going.

His new live album, 4 Nights of 40 Years offers an accurate retrospective on the past and present of the Robert Cray Band and finds this incredible artist from Columbus, Georgia in a real great shape. Bluebird Reviews is thrilled to meet Cray and talk about the new album and music in its globality.

BBR - Robert, welcome to Bluebird Reviews. The Live Album 4 Nights of 40 Years is the best way to celebrate an important landmark of your career. How easy was it for you to choose the many key songs to put on the album, given your extensive catalogue?

RC - Well, I had help, you know. We had Richard Cousins, our bass player to help out as well, together with our producer Steve Jordan and all our Management Team. We gathered together and we played a lot of tunes, we watched some video footage of some of our concerts and work out which of those were more suitable for the CD/DVD project. It was a great find as well, checking out this old video footage. It gave us a lot of pleasure and fun.

BBR - On the record there is a mini live show recorded in the Netherlands in 1987, featuring Smoking Gun and Still Around, among other tracks. Did you choose that particular show to be featured due to the quality of the live performance?

RC - There were three reasons why that show was chosen. First, the performance, then the line-up and the songs we played. We do not play some of those songs anymore, these days. I thought, choosing that show, was a great way to get these songs included on the record with that particular band which we recorded those tunes with.

BBR - On the DVD there is a touching tribute from you to Richard Cousins, your lifetime friend and band member of the Robert Cray Band. Can you choose three words to describe your friendship? 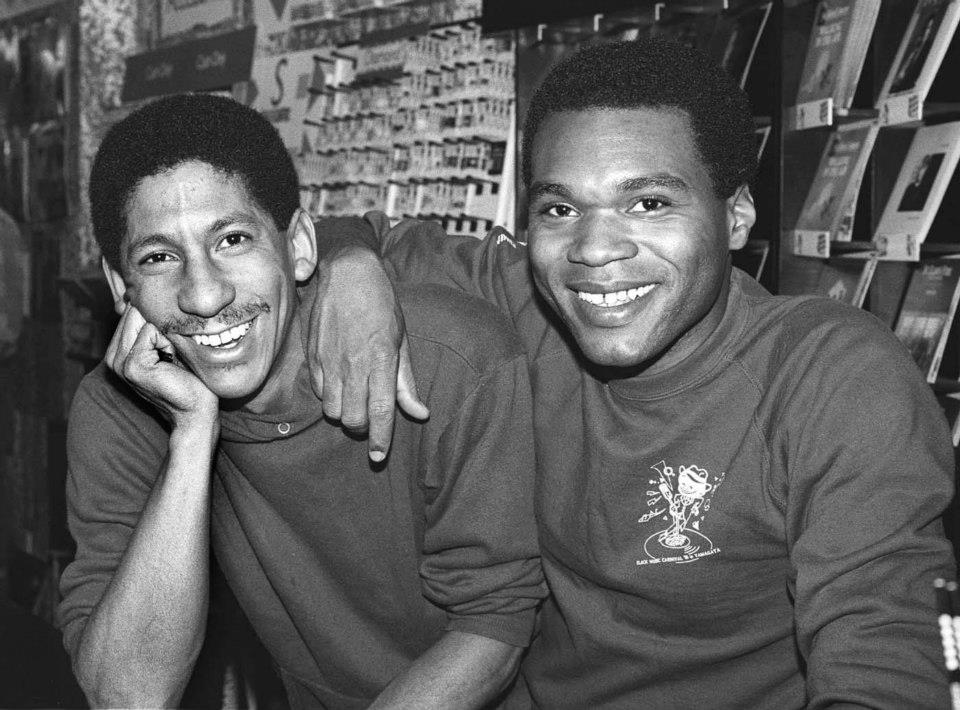 RC - Ha (giggles)! Three words, that is hard! I don't know. He is my best buddy, you know. It's just how it is. We have been friends since we were 15-16 years old. We went to rival High Schools, in the same High School District and we played in bands together long before we started the Robert Cray Band in '74. We grew up picking our cores and decided what it was we wanted to play before starting the band. I guess there is a lot more too. I mean, here I am, the frontman of the band, so to speak, but in the background, I know that there is Richard, which has always been the mouthpiece. Back in the early days, it was Richard that would go out and book the gigs for us, due to the fact that back then, we didn't have any Management or Booking Agency. That is the kind of personality Richard is. He is the outgoing one and I am the introverted one. Richard, back then, would also introduce the tunes when we were playing live, because I could sing the tunes to the audience but I couldn't say a word while on stage! So, it has been a Team thing, a joint effort all along.

BBR - You always have been depicted as one of the best music storytellers in the whole music world. How much has the angry Robert Cray of Nice As A Fool Can Be from the Who's Been Talkin' era, changed and developed his writing style?

RC - Well, I had a lot of help. Great lessons were learned by being able to work with Bruce Bromberg  and Dennis Walker in particular. Dennis Walker wrote some of the great songs we did early on and his lyrics were very visual. I am talking about tunes like Who's Been Talkin', Right Next Door, Because Of Me, all those are Dennis Walker's tunes. Myself and Richard were able to help for what concerns the musical aspect of such tunes. It was really very special the way Dennis wrote those songs, it was a great lesson for us, to be able to visualize the stories within the songs.

BBR - Many fellow artists have celebrated your special music birthday on the 4 Nights album, people like Buddy Guy, Eric Clapton and Bonnie Raitt, amongst others. Have you ever had any artist in particular, as a music role model, back when you started in the late 70's?

RC - There was a lot but Albert Collins holds a special place. We had the opportunity to work with Albert Collins, I believe the first time was back in 1976, which was just a couple of years after we started the band. We had the great privilege to be his back-up band while he was touring the West Coast, for about a period of over a year and a half. Standing behind Albert Collins, gave me the opportunity to be a backing musician. As a band, we were already playing some of Albert's tunes, therefore that experience gave me the chance to learn even more about him and his style. Albert was a real father figure to us. Through his experience, we learned how to cut our teeth with the first of our heroes. He was really important for us, on many levels. 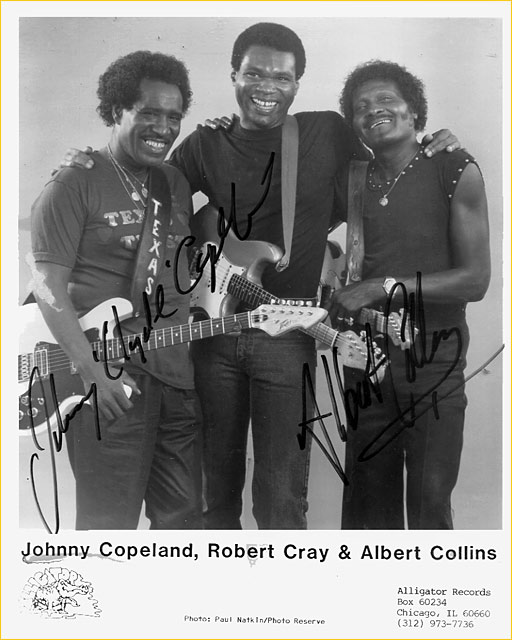 BBR - The Robert Cray Band has changed different band members, since the beginning. I feel the current line-up of the band is one of the best you have ever had. What is the secret about  being able to maintain the incredible quality of your sound?

RC - Thank you. You just have to be yourself. I think that is what is all about. The band members have changed, over the years for many different reasons but, fundamentally, I still do what I do. I am upfront and everybody within the band knows what their role is. It is pretty simple. I don't have any strict guideline, you know. I just want everybody to be themselves and let them all play out of their souls.

BBR - You have met and worked with authentic giants of the music business, people like the fellow artists previously mentioned or late great music legends like John Lee Hooker, BB King or Stevie Ray Vaughan. Have you ever thought about writing a book on your life, as a musician? You must have a lot of stories to tell.. 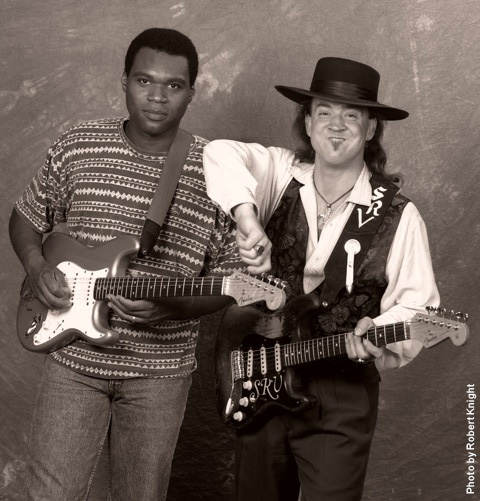 RC - There is a lot of stories but probably I need Richard to sit down with me and we can reminisce and put them out into a form that make those stories sound right. Yeah, there has been talk, to be honest and we'll see what happens. You don't know how interested people would be after all, we will see.

BBR - We all know, through your talent and artistry, who Robert Cray was 40 years ago and who you are now, as a musician. When you publish your next live anniversary album, what version of yourself do you wish to be?

RC - Hmm..I honestly don't know, because I am not gonna stop, that's the thing. It is so much fun, you know. When you hit the stage, it's such a challenge. You go out there and it feels like you are walking out there without your clothes on. You have to make people to listen to your music and forget that you are naked out there. Because people are not afraid to say what they feel about a show. And that is the reason why, night after night, we go on stage feeling like it is the first time we play in front of an audience, because that is the way it should be always done.

BBR - Your voice, together with your incredible skills in playing guitar, has always been one of the most recognisable trademarks in your career. Did you always want to become a singer or was that just something that you discovered all of a sudden?

RC - It was something that, you know, I guess goes hand-in-hand actually. I think anybody that plays wants to sing and then you discovered if you can or not. I knew I could hold a melody but, in the first band I was in, we had lead singers. And in a couple of those situations, it just happened that the lead singer quit, so I took over. To be honest with you, the second time that happened, we went to an audition and the lead singer didn't show up for the audition so I took over again. We didn't get the gig but from that moment, I took over the role of lead singer. Being an introverted person, it was a big step for me. When we started the Cray Band, anyway, I was the lead singer but Richard was still making the announcements! (chuckles). It has been a real work in progress, starting talking to the audience on stage between tunes. At first, I started talking to the crowd real fast, because I wanted to be as short as possible and then I gradually slowed down the pace of my announcements in-between songs. As you may know, I am perfectly comfortable, right now.

BBR - Robert, music legacies among artists is what keeps the music chain going, through time. As I am sure many fellow artists have transferred part of their legacies to you, by the same account, what part of yourself, as an artist, would you like to pass to future generations?

RC - I think that people should have an open mind towards music, you know. I think that people should have the opportunity to listen to different music genres. That's how I grew up and the guys in the band grew up and that was long before, especially in the States, people tend to categorise the music a lot. Now you have satellite radios and there are so many different stations playing every single music genre on the planet. So anyone could pick their favourite station and stick to it, they would never change the dial on the radio. In this way, they would be never able to find out about people like Duke Ellington or Hank Williams or Albert Collins. My advice would be to keep an open mind about music. You can try and listen to a tune belonging to a different genre and, if you don't like it, that doesn't necessarily mean you should dislike immediately that genre. Because in the whole world, there is a lot of good country, rock, jazz, blues or classical music. Speaking of my music, whoever comes to our shows, is able to hear many different elements belonging to different music styles and that is the reflection of how we, in the band, grew up. People needs to listen healthily, a little like trying a wide variety of food. When I think about the way I write a tune, it's all natural and spontaneous. It's not like, I sit down thinking of writing a song on a specifing genre. When the tune is finished I would look at it as a unique creation, a genuine result coming from the soul. It's all about thinking freely and be open.