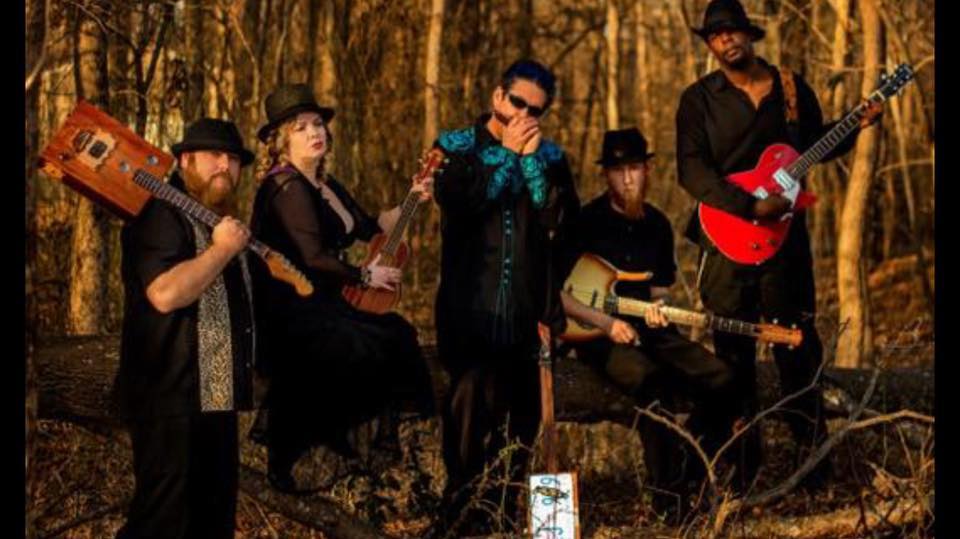 Between East Street and the Mississippi River in Memphis TN, there is a special place that holds a lot of secrets and tales related to the history of the blues. This place is called Beale Street and there, in this almost 2 miles-long stretch in the heart of Downtown Memphis, anything can happen, especially when it comes to music.

Beale Street is the birthplace of Mississippi Bigfoot, one of the greatest blues/rock revelations of 2015. Their debut album, Population Unknown, previously reviewed on our website, has been unanimously recognised by the music press worldwide as one of the best releases of the past year.

To track down the band has not been that easy but in the end, Bluebird Reviews managed to reach Christina Vierra, the band's singer/songwriter, to discuss about the making of Population Unknown and how the band got together.

BBR - Christina, 2015 has been a special year for you all, thanks to your fabulous debut album Population Unknown. What inspired you to call the album in that way?

BBR - We have read differing opinion about your style from the music press,  due to your great ability to combine elements of the traditional Delta Blues with 70's rock with tinges of funk and R&B. How would you guys call your unique playing formula?

Christina - Well, that sounds like a pretty good description to me. We definitely like to pay homage to our music scene, what we have down here in The Delta, where some of the great roots of music come from. Though, at the same time, we like to have the freedom to take our music to other directions and have the opportunity to crush genres together. Fundamentally, we don't like to stick by any rules or play what people think we should play. We just let our musical flow run and break new grounds. It's a pure free-form expression, our sound is what we are.

BBR - Your album has been one of the best surprises of 2015. How long did it take to write and record Population Unknown?

Christina - Thank you. Some of the songs of the album have been written over few years, some other have been written almost instantenously. A song like Mighty River, which is the first one I have written here in Memphis, was born pretty much within minutes. It tells the story of my experience on going down to the Mississippi the first time, riding my bycicle and feeling deeply inspired by its sound and the almost hypnotic way it runs.  As far as the recording goes, we spent something like 8 days in the studio and we managed to record Population Unknown exactly in the way we wanted. It was pretty amazing for me, because I have never done so much work on an album in such short amount of time. It was really intense.

BBR - The opener Burn That Woman Down digs immediately into very deep subjects, like the importance of women in modern society. Was there a particular episode that inspired and triggered such powerful lyrics on this tune?

Christina - I appreciate that you guys noticed that. It's a song about women being at the fringe of society. It's not about a specific one but I just wanted to get an important message out there about the role of women in nowadays' world and how they are perceived. I felt like it was something that really mattered to me and I wanted to get it out there. Many songs on the album attack subjects like that. It's pretty heavy stuff.

BBR - Clarksdale is perhaps the key song of the album that brings everything together, carrying hints of Mississippi Hill Country Blues. Has Clarksdale really managed to "save your souls", as you sing? And why does the devil say, at the end, that he's "coming back just for Johnny"?

Christina - (Chuckles) I am not sure my soul has been saved through that song. When we were down in that area, that expression that I sang did really come up. I brought it up to the guys in the band and Johnny (Holiday, guitarist) said, "No, you don't wanna do that". What we talk about in that song is really a serious subject. Some people think that it is just a story, but I feel that there are some elements of truth about Clarksdale and its dark misteries, although we managed to express them in the song in a tongue-in-cheek kind of way. Maybe we should have not put in the end that thing about Johnny and the devil but, hey, guess what, we did! (chuckles).

BBR - Christina, we sense in the lyrics of You Did something almost autobiographical. You sing with a special power and intensity on this track, like you are feeling that song deep in your skin. Is the tune about yourself?

Christina - It is a song very close to me and it's about memories of times when my heart has been broken. Being that tune so personal, I guess I was able to deliver my vocals with a particular conviction and I am glad you felt the intensity. The song is about that moment when all you want from your partner is to admit and acknowledge what sometimes happen between a couple and accept responsabilities. So many people don't get that message about what real respect is between two people. The song almost wrote itself, it was just a personal take about making a point and do not give the satisfaction of holding back but rather say: "Hey, you did that, not me". For everytime I have felt myself in that way, I always found very liberating just to tell it as it is. I hope that kind of feeling resonated on You Did too.

BBR - Did you guys work with one another, prior to that famous gig in Ground Zero in Clarksdale, where it all started?

Christina - Ashley (Bishop, guitarist) and I met in Beale Street some time ago, close to the time I moved around the area. I was trying to meet new people, to connect with new friends but, for some strange reasons, people seemed almost scared of me, maybe thinking "Should we join her or fight her?". Ashley had approached me asking whether we could work together and he had been the first one to do so, when I moved to Memphis. He just said: "Stick by me and I shall find the best guys in the establishment".  When Doug (McMinn, drummer) got involved, we all knew that the nucleous of the band was there. Doug had been playing with many big names in the music industry (The Drifters and The Platters, among many) and that dragged even more attention to us, because many people was dropping by and see us playing, since they heard Doug was in the band too. When it came down to find the missing dots within the band, we have been also very priviliged to get on board Cade "Missippi Mudd" Moore to complete the circle. Having Bigfoot as part of the name of our band also says a lot about us. Not only about the passion for music we all share but also about our sense of humour and our imagination. Those are important elements that help to keep the spirit high and happy within the band, things that many tend to underestimate nowadays. 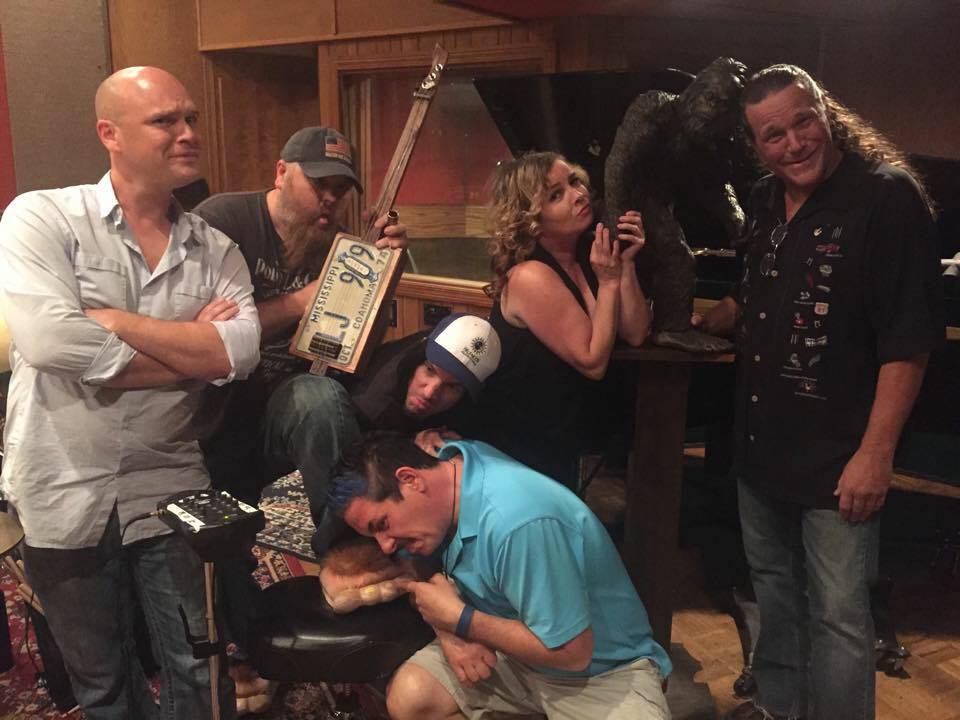 BBR - Your debut album has received lots of praises in the United States and now there are rumours of a European Tour due to start really soon. How thrilled are you to bring your high-octane fuelled sonic formula to the other side of the pond?

Christina - I cannot wait, honestly. That will be my first time in Europe, ever. I have been in places like Mexico and in the majority of the United States but never to beautiful Europe. It is all very exciting. We often meet a lot of Europeans in Beale Street and we always get great receptions from them. I am really over the moon about the idea of touring there. I hear that in Europe, music fans are very receptive and like to cheer bands all the time, hopefully they will do the same for us too! (chuckles).

BBR - The blues is, perhaps, one of the very few genres able to infiltrate the hearts and souls of musicians and music fans. It becomes almost a way of life, the air you breathe, a life path to follow for many. How does this phenomenal music style influence your everyday's life?

Christina - That was really well put. Like you said, blues is something able to reach some deep places of our souls. That happens not just for musicians but for fans too. Every time we walk in a room and play our music, there is nothing more special than hearing somebody saying back to us: "You really moved me on that song" or stuff like that. It is so incredible how blues helps to connect with people and how fans feel so emotionally close to the genre. Through our music, we just wish to bring to our fans some of our good experiences and hopefully convey to them our passion and honesty. It is a deep honour and privilege to be able to exchange our emotions with an audience, even just to a single soul. Back when I was 14, I went to see Howlin' Wolf live and afterward I felt such an intensity that I rarely felt in any gigs I have ever seen before. I always dreamt to become, one day, somebody able to transfer that deep feeling and emotions I experienced in that unforgettable day to our audiences, every time we play live.

BBR - Christina, one of the late great Luther Allison's favourite quotes was "Leave Your Ego, Play The Music, Love The People". Is this the winning recipe for Mississippi Bigfoot's success?

Christina - Wow, that is some quote! I think Allison's statement really sums up our attitude, who we are and what we want to convey to people. That is an awesome quote, I am afraid I cannot think of anything better to say after that. We can only play our music to the fans and being ourselves, that is all that matters to us. I guess that is what really Luther meant.

Mississippi Bigfoot are currently on Tour. You can find their Tour Dates at the Band's website