The New York Times and record stores around the globe announced today that Sylvia Robinson died at 75 years old in N.J.

You know who she is, even if you don't think that you do.

"Love Is Strange." The number one song written in 1959 and sung as a duet with Mickey Baker, was made immortal by Jennifer Grey and the late Patrick Swayze in the 1987 film, 'Dirty Dancing." This song is sweet, elegant, and uniquely romantic, with its swanky guitar licks, constant step rhythms and mid-bridge conversation. It is truly unmatched.

Sylvia and her husband, Joe Robinson, started a record company, All Platinum, which had financial troubles. Thankfully, for the music world, they didn't give up. She was inspired to record people rhyming over disco transition beats at clubs in Harlem, and in her search, discovered the trio that would lead the record industry in creating one of the first rap songs. You know who this is, even if you don't think that you do.

Big Bank Hank, Wonder Mike, Master Gee of the Sugar Hill Gang, were reportedly discovered and recorded by Sylvia Robinson and her son. The 1979 recording of "Rapper's Delight" was on Sugar Hill Records, which was formed by The Robinsons. They later signed Grand Master Flash and the Furious Five to record 'The Message'. Both of these songs were breakthroughs at the time, opening doors for other artists and this genre permeated rock, jazz and pop throughout the 1980's and still today. Even if you don't like the hip hop styles of today, "Rapper's Delight" and "The Message" are iconic. They caught on so quickly because this way of performing and listening was either really fun or it told stories of urban life that had never been heard before in music. 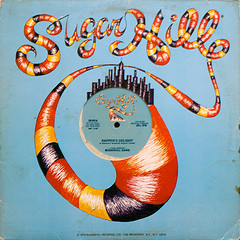 Memories of my first listen to "Rapper's Delight" were in the kitchen of my home in Pearl River, NY. My sister had the LP. I can still see the colorful Sugar Hill label. The beat, although familiar from Chic's 'Good Times,' in its extended version, grabbed my attention permanently. As a kid, I loved to listen to the singer-songwriter styles of Gerry Rafferty, Carly Simon and Cat Stevens. I'd hang out in my basement with my records and Snoopy transistor radio and do artwork for hours. To emerge from this solitude and learn the words to this totally hip new song made this quiet kid secretly cool. Even my sister, who tirelessly tried to rescue me from my geekdom, was impressed. I didn't know that rap was going to be a groundbreaking way for artists to change their self expression. I didn't know this breakthrough would have to do with overcoming hard times. I just thought it was a really fun song and I learned the words in about ten minutes. Looking back, as a kid originally from the Bronx who had experienced her own bout with hopelessness, I was healing, and life was looking better for me day after day. Maybe I connected with the resilience of this new genre more than I realized.

As I grew up, there were people who knew Rapper's Delight and people who did not. Even if they didn't, they respected it and quickly caught on. Sharing this song was a way to bond with other people and celebrate that era. The funk and the soul, we all share it, no matter who we are - that's the hope.

I met the Sugar Hill Gang. I did ! I was at an academic conference for work in Chicago, 1997. My friends and I were going out to dinner and somehow I came across a flier on the street that said, "Sugar Hill Gang at the Shelter". The Shelter was a multi-level club with lots of different kinds of music in each room. Crammed in a downtown cab, I dragged my friend and the rest of the faculty to see Sugar Hill. They didn't go on until 1 am. It was a long wait, but the folks I was with were loyal and when the trio came on, it was like a dream come true for me to see them. They played Apache, 8th Wonder, and other songs, so Rapper's Delight was toward the end of the set, of course. The beat, the crowd, the amazing energy in that place literally was about to tear the roof off - but that's another song for classic funk week. I shouted those magic words "to the black, to the white, the red, and the brown, the purple and yellow!" and "Ho-tel Mo-tel" - to "goin over to a friend's house to eat and the food just ain't that good" - to "whatchagonna do today" -  They invited me on stage and I sang as loud as I could, hanging out while they were scratching the famous records.

I will never really be cool, I admit it. But the feeling of shouting out those words that I had in my head for decades, with all of those people at that club singing along, and the famous Sugar Hill Gang right there with me on stage made me understand something about humanity that I just can't explain. I'm happy to have experienced it.

Live your life, no regrets, respectfully yours ~ bird.