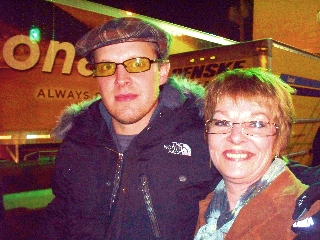 As a fan, I continue to grow in Joe Bonamassa's music, and often ask myself, "Why am I drawn to him (and his music) so?"
I was raised in a home where music flowed freely; a home where my father's career as a local rock and pop DJ spilled over into our daily life. As a result, I was introduced to a wide variety of music genres from blues, to hard rock, to Motown, to Top 40 and more. The list of bands and soloists met through the years (both local and national acts) is lengthy. So what is different? What is it about this one individual that makes me want to tell the world?
The answer is simple: What's not to like. Joe's the real deal!!!
More Joe Bonamassa on Amazon.com
From early on, it was evident that 12 year old, Joe Bonamassa was not only a guitar virtuoso but destined for legendary status. Watch:  Joe Bonamassa at 12 years old.
After years of hard work and continuous playing and touring, his guitar skills only improved. For me, those skills rival guitarists twice his age; an "every great guitarist rolled into one" kind of package deal.  I recall when my teenage, southern rock, friends thought traditional blues were dead and not for mainstream radio.
Watch this video of Joe live the Wang Center 2011, and you will understand what I mean.
Jetzt Kaufen, of Epiphone, summed it up best: "Musicians that redefine an art form are few and far between." Joe Bonamassa has single handedly transformed blues rock with his own unique fusion of both old and new ideas."
Watch:  Epiphone-Limited Edition-Joe Bonamassa-Les Paul-Goldtop
As a singer/songwriter/guitarist, Joe Bonamassa is relevant!
Take any track off one of 13 solo studio albums and you'll either be swept up by a blues ballad full of soul or by the passion in his playing on an extended and gripping rock riff (some in excess of two minutes).
What's more--the "blues rock titan" is an electrifying performer who gives every attendee their monies worth. "I give 100% of whatever I have to give on that very day," Joe Bonamassa remarked in 2011. His fans agree! They continually describe their first "live" experience similarly: "Mesmerizing!" "Awe-inspiring!"
As a touring professional of over 20 years, his career continues to take shape. I marvel at how Joe has proved to the corporate music industry that he is a sustainable, independent artist (with his own recording label J & R Adventures).
Through innovative use of modern technology such as Facebook, Twitter, and Youtube (where thousands of music fans can be reached with one keystroke), he has become an international touring superstar, selling out every venue no matter the capacity.
Lastly, and most importantly, Joe Bonamassa is genuine and a really nice guy who gives back to his fans!
Watch Joe from  Max's Guitar Store Meet & Greet
Yours in music,
DebFromMaine
Joe Bonamassa Official Fan Network
Joe Bonamassa Official Website
More Joe Bonamassa on Amazon.com
Author Info
Author: Deb Hebert
About
Recent Articles