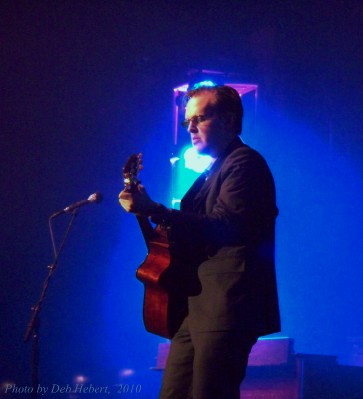 From time to time Joe Bonamassa fans are queried about what they would like to hear next from "The New King of Blues." - Guitarist Magazine.
More Joe Bonamassa on Amazon.com
There is a strong consensus amongst his most devout fans regarding his astounding acoustic guitar mastery, such as seen and heard on this signature performance of  Woke Up Dreaming. "His early classical training shows often in the complexities of his arrangements and his blend of pick and finger styles," says High Plains Reader.  Fans are in for a treat because the international superstar will switch out an electrified Gibson Les Paul for a Yamaha LJX262, according to the weekly fan Newsletter of April 13, 2012.

"This summer Joe Bonamassa will perform a very special one time only Unplugged Adventure like never before..."

Tickets are now on sale for seven shows, scheduled over two weeks.

What's more amazing, is Bonamassa will release yet another concert DVD. The performance at world famous Vienna Opera House, on July 3, 2012, will be filmed. To date, that's two full length, solo performances in less than one year. This does not include his participation in Black Country Communion, which is a side "rock" project where he is the band's lead guitarist/vocalist. BCC's 2012 release of "Live Over Europe", was filmed at five venues across Germany in 2011.

When I learned of the acoustic tour I became extremely excited and thought to myself, "What a brilliant idea!"
I love an acoustic performance because it's an art form in and of itself. Not only are these settings personal and intimate, the artist's talents are showcased in a different light.
For me, if the acoustic rendition of a song blows me away, then the plugged-in version must be better! So, I sat at my computer and easily slipped into my own, Bona-dream-state-of-mind, imagining what would Joe look like on stage? What would he wear? Would the mood be softer? Or would the music be louder to compensate for not having a band? I opened Firefox and searched under my "Bookmarks," paying close attention to the video titles that said, "acoustic."  Before long, I had posted six or eight videos on Facebook to share with other listeners.
Fan favorites like Walk In My Shadow, from "A New Day Yesterday," 2000; Faux Mantini and Revenge of The Ten Gallon Hat, from "Had To Cry Today," 2004, immediately stood out to me; as did High Water Everywhere, from "You and Me", 2006, and
the title track off Dustbowl, 2011, heard here from a Guitarcenter podcast, Dustbowl.
I concluded there are just too many choices...
However, one thing for sure, no matter what the set-list does comprise, this "one time only" acoustic tour is destined to transcend music fans to a memorable place: an Acoustic Wonderland.
Yours in music,
DebFromMaine
Click on the link below for:
Joe Bonamassa tour dates, ticket links, weekly newsletter and more!
More Joe Bonamassa on Amazon.com
Author Info
Author: Deb Hebert
About
Recent Articles