The Villains are an upbeat, contemporary rock band with talented artists, well versed in classic rock techniques and country vibes. For this second album, Velocity, they are backed by a powerhouse production team, including Stan Lynch who worked to produce Tom Petty and The Heartbreakers and Don Henley. Billy Chapin (Backstreet Boys, Edwin McCain) is also on the production credits, as well as John Kurzweg (Jewel, Creed) on mixing.

From The Villains' Biography~ In the spirit of acts such as The Band, The Eagles, and Fleetwood Mac, the blend of different singers and styles solidified the sound rather than compromising it. Their first album, ‘Just Another Saturday Night’, yielded two Triple A charting singles, ‘Let’s Forget About It Tonight’ and ‘You Don’t Have To Say’, both co-written by Sheryl Crow and Don Henley guitarist, Peter Stroud. The record was a critical success and the band toured opening for Blues Traveler and Sister Hazel through the end of the year. After months of writing and rehearsing, they entered Sound Emporium Studios in Nashville to record their second record, ‘Velocity’. They once again enlisted the help of Peter Stroud as well as A-list songwriters such as Tom Douglas (Miranda Lambert, Tim McGraw), Stan Lynch (Don Henley, The Eagles), Richard Feldman (Eric Clapton, Joe Cocker), Josh Leo (Lynyrd Skynyrd, Alabama), and James House (Dwight Yoakum, Martina McBride). 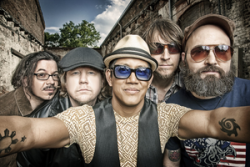 Rainy Day Girl- The 'Sun Records' t-shirt in this video was a great sign of good things to come with this band. The video sets off beautiful imagery of innocent love found and sought again and again. The rhythmic, ethereal flow of the beginning chords that weave through the song, reflect Don Henley’s sound influence, while allowing The Villains to grow into their own style. Magno takes on strong lead vocals, while back up vocals show a vulnerable side of these multi-faceted musicians. Their willingness to take on many different roles within this band sets them up for great explorations and variations in music within the same album. The lyrics and storyline to "Rainy Day Girl," combined with the catchy bridges and refrains, keep this song with you, regardless of the weather. It reflects a lingering craving for that once in a lifetime experience to be recreated after it’s passed. Love may not have a replay button, but luckily, Rainy Day Girl can be programmed to ‘repeat.’