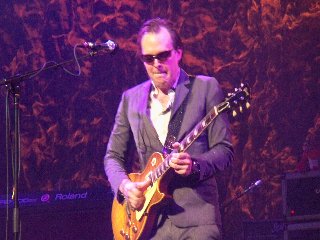 After near weekly career defining events, in August I declared 2012: The Year of Joe Bonamassa. It now appears he is set to make music history in 2013, when he returns to four uniquely different performance halls in London.

Each venue has a special place along his career path. For obvious reasons, these four shows have already been hailed as "guitar events of the year." What's most exciting though, is Joe's management has just announced that he'll play never before performed tracks from his 10 solo albums. My real tears of joy came when I read these shows will be filmed and released on DVD in the Fall of 2013.

Fans can vote on which songs Joe should add to the individually designed set list. I voted for three: "The Meaning of the Blues" and "The Last Matador of Bayonne," both original works from Dustbowl, 2011; and "A Place in My Heart," a Bernie Marsden cover from Driving Towards The Daylight, 2012. For me, these ballads are pieces of art that showcase the blues-rock titan's sultry vocal range and dazzling guitar skills. The Royal Albert Hall and Shepherd's Bush are sold out, but tickets are available for the other two venues.

You can read the full press release and obtain ticketing information here.