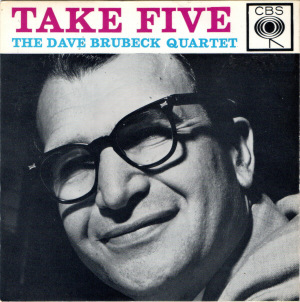 Composer, pianist, Dave Brubeck, has been designated by the Library of Congress as a 'living legend.' Known for decades as a jazz and classical musician, his work was always fresh and contemporary, using techniques such as "odd time signatures, improvised counterpoint, polyrhythm and polytonality." Mr. Brubeck grew up in California and took piano lessons from age 4-12, until his father moved the family to a cattle ranch. He then stopped formal lessons and helped his father on the ranch, later enrolling in veterinary medicine, with plans to return to the business. He worked his way through school playing jazz in night clubs, changing his college major to music. In 1942, his rich experiences in music were given even more depth, starting a multi-racial band in Europe, through his travels in the Army. When returning, he enrolled in Mills College and studied with French Composer, Darius Milhaud, who encouraged him to pursue a career in jazz.

"Brubeck was the leader of the Dave Brubeck Quartet, one of the most significant acts of the West Coast jazz movement. The quartet recorded five Top 10 albums, including 1959's Time Out, which reached No. 2 on the Billboard 200. Brubeck received his first career GRAMMY nomination in 1960 for Best Jazz Composition Of More Than Five Minutes Duration for "Blue Rondo A La Turk." The quartet's highest-charting single was "Take Five," which reached No. 25 on the Billboard Hot 100 in 1961 and received a GRAMMY nomination for Record Of The Year. With a recording career spanning more than 60 years, Brubeck was also known for jazz standards such as "The Duke" and "In Your Own Sweet Way." In 1996 Brubeck received a Lifetime Achievement Award from The Recording Academy. Two of Brubeck's recordings have been inducted into the GRAMMY Hall Of Fame: "Take Five" (inducted in 1996) and Time Out (2009). His most recent GRAMMY nomination came in 2009 for Best Classical Crossover Album for his participation on Yo-Yo Ma & Friends: Songs Of Joy And Peace."

I was privileged to see him live at The Tanglewood Jazz Festival (2002), the camp out in the pouring rain was worth every note. One of my favorite records of his is Just You Just Me (1994).

Mr. Brubeck died of heart failure in Norwalk, CT, just one day before his 92 birthday.