Beneath The Sheets: "She's Bad And She Knows It" 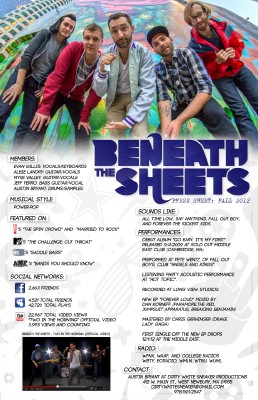 Press Release From Boston Based R&B Hip-Hop Artists: Beneath the Sheets.

Sounds Like: Forever The Sickest Kids, Fall Out Boy, Maroon 5

The new song, "She's Bad and She Knows It," a preview of their upcoming album due to be released in 2013, is a throw back to straightforward R&B Hip-Hop. BTS layers vocals, guitars and chanted harmonies, to kick out a house party track that will make stylin' audiences jump and scream for more.

Their hard driving debut pop album, 'Go Easy It's My First ..." has some catchy hooks and audience grabbing dance tracks, with fusion featured energy that smashes through sound barriers.