Details
Written by Bluebird
Published: May 26 2013 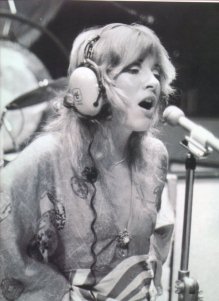 Looking through my old ticket stubs and recalling the shows that I've seen. I was lucky enough to catch STEVIE NICKS with PETER FRAMPTON in 1986 at the Orange County Fair in Middletown, NY.  Back then, cameras and video were rare to bring to shows unless you were a bootlegger, which I never was. Thankfully, years later, shared footage is available. Take a look at the excitement that Stevie created while supporting Frampton on tour. And watch at the end how she is SO gracious and involved with her fans. She STILL is!

I saw her again in 1989 at Jones Beach. She is one of those artists who is so close to my heart and soul, that I've never written an article about her. Despite the full Fleetwood Mac collection and Stevie Nicks solo records, placing ethereal music and lyrics in my head for the past several decades, finding words to talk about the Welsh Witch Music muse is difficult. All that I can say is she was part of my own coming of age in understanding music can be an expression of what is unspoken. I learned from Stevie Nicks that music is not only something you listen to, but a way of life. Her songs describe a type of connection that very few understand. She sings of the grey areas between love and loss, spirit and wind, being and thought. If you're a Stevie Nicks fan, you will know what I am talking about.

One of my favorite videos of Stevie Nicks includes Lindsey Buckingham, recording the song, "Angel". Notice the connection, the tension, that is still between this dynamic couple in rock. Their chemistry on stage and in songwriting remains unmatched in this and any other lifetime.

As of this writing, Stevie Nicks is touring with Fleetwood Mac and promoting several previously unreleased songs with the band.

Here are her latest press releases:

New Fleetwood Mac Songs Released
Fleetwood Mac has released 4 new songs on a downloadable set titled Extended Play. The set includes Lindsey's "Sad Angel" and Stevie's "Without You" which are being played on the tour, plus two other songs, "It takes Time" and "Miss Fantasy". The songs are available on iTunes and Amazon. The songs can be downloaded individually or as a set. Click HERE to go to iTunes and preview or purchase the songs on Extended Play.

She is also involved in a recent movie:

"Stevie Nicks: In Your Dreams" Download Available The "In Your Dreams" film documentary is available for digital download exclusively at iTunes on May 14th. The film is being released after a recent successful theatrical run where it received rave reviews by the fans across the US and Canada. You can purchase it on the iTunes order page. 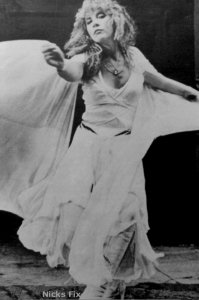