ADLER: Back From The Dead 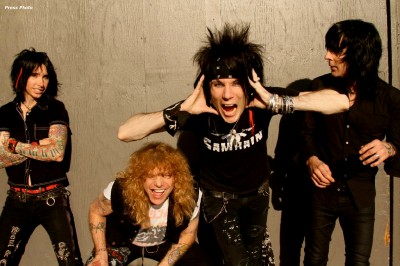 Back From The Dead  has been out for several months, and even Guns and Roses' purists, who can be die hard skeptics, are diggin it. Recorded in Los Angeles with producer Jeff Pilson (FOREIGNER, DOKKEN) and mixed by Jay Ruston (ANTHRAX, STONE SOUR) it is bold and modern bright, with 1980's loyalties. Some rockers are saying it's one of the better solo works to come out of the GnR tradition, even going as far as  saying it's as good as, or better than, Slash's latest release. This may be good news for Slash, however, because he guests on the album. Heavy and sharp, with plenty of straight up head bang-er phrasing, the album emits high energy and a good dose of solo edges, to add to the tension building. The release explodes into a great frenzy of metal mania, and the record is an enjoyable listen, because of the quality of musicianship. The experience of these talented musicians and great balanced production, makes the heavy sound accessible to classic rock fans too. Track 10, "Your Diamonds," had a vintage feel of deep cut Boston or Journey, in the strong vocal harmonies, stop on a dime timing, and piano/organ back tones, finishing finally, in a guitar solo tease- and an anthem rant that fans can latch on to. The only one ballad of the record, "Just Don't Ask" features Slash. It has that 80's hair band feel, with sing along, memorable melodies, remaining strong to the metal edges that we love so much from that era.

The editor of the Led Zeppelin Ultimate Fan Page listened to the record and had this review:

It's basically straight up rock and roll, no frills, effects. Adler proves that he still has what it takes to keep the backbeat of a band. The band sounds tight and a good indication that they can grow if they stick to the basics and not try to compete or imitate with other bands out there. Having John 5 guest on 'Good to be Bad' is my favourite track. (Slash actually appears on 'Just Don't Ask'.) I enjoyed it, honestly, (and yes, I loved Slash's solo work, too) which says a lot, as I was initially a skeptic of Adler's, so this is huge for me to give a positive review of Back From The Dead.  (Izzy's solo efforts are also amazing, by the way. The debut, Izzy Stradlin and the Ju Ju Hounds, is still a fave CD of mine.)

Read an interview with Jacob Bunton of ADLER here.

From Celebrity Rehab to the Rock N Roll Hall Of Fame, Adler marks

Roses). The collective foursome known as Adler is comprised of

The Key Club in Hollywood, CA. "I was in town for a friends

memorial" states Bunton. "I was at a club on the strip with my friend

Jay Ruston. He told me he wanted me to meet with a couple of the

Adler's Appetite guys to discuss a new project. He introduced me to

Lonny and we hit it off immediately. The next day Lonny and Steven

came to my hotel room and we sat around and talked music for hours.

for the fans" states Steven Adler. "While we were on the road last

year, Lonny gave me a CD with some amazing songs that he had

written. It really lit a fire inside me to start creating again. We

immediately started looking for a singer, but after trying out several

candidates, we got a little discouraged. I wanted someone with a

dynamic range that had their own sound and style. Just when we

thought we had hit a brick wall looking for a singer, Lonny called me

one night and said he had just met Jacob and that he was our guy. As

soon as I met Jacob and heard him sing, I knew that I had found the

singer I had been looking for."

focus on a new project from scratch. We were looking for a singer

with a unique voice and a broad range. Jay suggested Jacob and said

we should meet. It's funny because when I pulled up to The Key Club

that night, I saw Jacob outside and said to my friend 'that dude is a

total rockstar, I wonder if he can sing.' When Jay called him over to

meet me, I thought this is meant to be. Jacob is exactly the frontman

that we had been looking for."

material. In January, the band began recording their debut album with

(Anthrax, Steel Panther, The Donnas). "The Chemistry between all of

us is amazing" says Bunton. "The recording process has been an

awesome experience. We're not relying on computers and auto tune

to fix everything. We're totally going by feel and capturing the raw

energy of the songs. It's a real rock n roll album, performed by a

band, with a real human element."

Adler's debut album, Back From The Dead features guest

days" states Adler. "I'm so excited for everyone to hear this record!"

Back From The Dead was released through New Ocean Media.