Gentlemen Hall Rock "Take Me Under" in New Productions! 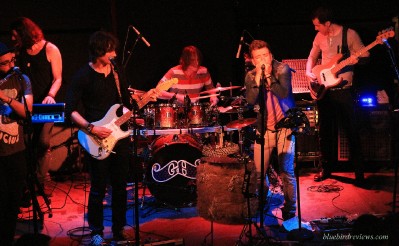 This already successful, normally techno heavy song, has been in the GH recording and tour circut for several years now. From the album, When We All Disappear, it is a fan favorite. The ever innovative, Gentlemen Hall showed creativity, intelligence, and a commitment to exploring authentic new sounds, when they rearranged the song using only bells, a cappella and percussion. Watch how precise they each have to be in bringing this all together and the patience of the drummer, Phil Boucher, as he follows the group with his mind, like a metronome.

"Standing strong between the high-handed anthemic choruses of the Killers and the retro synth melodies of MGMT along with a dash of wildman flutist antics, Gentlemen Hall has established itself as one of the most talked about bands to emerge from Boston in recent years."

In 2009 MTV awarded them the Video Music Award (VMA) for "Best Breakout Boston Artist." In 2010 the Boston Phoenix named them "Best New Local Act.". Two years later in 2012, the magazine would award them "Boston's Best Act". In 2011 the band recorded the EP, "When We All Disappear," with producer Michael Seifert and mixed by Michael Seifert and Tony Maserati, and shortly thereafter began touring in support of their freshman EP. The band made their national television debut when they performed live on the Billboard Awards on the television network ABC on May 22, 2011. Ice cream company Ben and Jerry's has also created a signature smoothie in the band's name, available throughout its Boston and Cambridge, Massachusetts locations. The band also garnered two Boston Music Awards in November 2011, for "Pop Rock Artist of the Year" and "Video of the Year" for their song "Close to Me" (Directed by Ethan Goldhammer).

Their background of music education at Berklee has not failed this ensemble. Straight out of the box they came, with creative technology and talented musicians, wielding guitar, bass, multiple vocals, synths and the now famous, GH flute. I met Gentlemen Hall and their management team at the 2011 Boston Music Awards. Then I caught them again as they headlined at the Iron Horse a year later to a full house. In the meantime, they'd been on TV, with their songs featured on multiple commercials and now you can hear their new song, "Sail Into The Sun" playing during Sox games at Fenway.

Every time I run in to GH, they've transformed themselves again, not to the point where you don't recognize them, but to the spirit where you know they are always striving to create better music, so you respect them even more. This band is fresh, energetic, dedicated and solid in maintaining their line-up. The GH reputation stands alone. While other bands are hammering out the same sounds, quality as they might be, they can become static. Or other Boston bands may come out shining, but squander their talent for unfortunate reasons. GH is consistently respectful of the vast music world and never lets their immediate success undermine their passion.

Like many music innovators, they are more interested in experimenting with, and inviting, quality sound rather than being 'pop' popular. This is adding to their widely known catalog and keeps, even loyal followers, newly excited about their shows.

My new motto for this year, for many reasons is - We'll see what's next. This fits well with GH's evolutionary style, hanging with them on Friday night at the Iron Horse just added to the anticipatory vibe of (What's Next?) in the music world.