WANG CHUNG has a NEW RECORD: Tazer Up! Listen to "Let's Get Along" 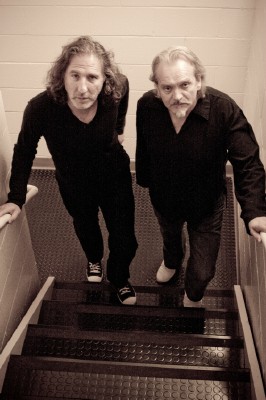 WANG CHUNG will hit the US shores on July 18th. Don't blink. While everyone will be Wang Chung-ing, they are cranking out prolific, high energy tracks, that might just steal away summer and top the charts again.

In advance of their show, we've been listening to their new release, TAZER UP!

One of our favorite tracks is the hip-mod groove of "Let's Get Along." It starts out with a spare acoustic string, then leads into some smooth vocals and a great vibe mixed with some techno-edge. Guitar riffs underline it making the song soar, yet it hangs from a high wire of cool. Listen closely, because a world music theme is there, with some cultural chants, and then it whisks you back to the fast beat of the running track.

Why is the record called Tazer Up and what is the significance of the cover? Tune in for more footage of Wang Chung in the upcoming weeks!

Until then, we'll leave you with the meditative, London Orbital.