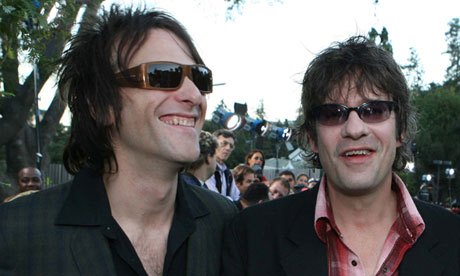 Color us impressed, and obsessed. We love The Replacements. Paul Westerberg's words across any blank white page have been in our heads since the Mats debut in 1979. The Minneapolis band has been through some painful losses, Bob Stinson passed away in 1995, and Slim Dunlap suffered a stroke in 2012. So when the independent producer of RIOT FEST wildly succeeded in bringing together Paul Westerberg with bassist, Tommy Stinson, fans and media, watched from the ledge. Aching to be, left of the dial, after they infamously split on stage 22 years ago in Chicago - Would they show up?

Waiting for the announcement of who'd back Westerberg and Stinson for these shows was brutal. Months of heartbreaking news of Slim Dunlap's stroke last year, were only lightened a bit, by the Songs For Slim fundraising project that was elevated by dozens of A-list musicians to help pay for his health care. We couldn't have Slim, no matter how much Jesus rode beside us. Chris Mars made striking album artwork to support his dear friend, but continued on his art career, leaving the drum kit empty. Kevin Bowe and Peter Anderson showed heroic mastery in recording the first Songs For Slim with Westerberg and Stinson, but alas, even with the hoax of Har Mar Superstar joking he was in the line-up, the tension wasn't broken, until the official band was spoken. The Star Tribune finally confirmed that drummer, Josh Freese, (GNR, Nine Inch Nails, Devo, Paramore) and guitarist, Dave Minehan, (Boston band, The Neighborhoods) would be the band that had the honor to be called the Replacements Reunion.

Some fans still believe this is not an official reunion without certain key members. This is always a point of contention in any band regroup, and a right of opinion among loyalists. We are not here to debate this point, just excited that the Mats are once again, out of the basement, and into the light of modern day music. Reviving the punk roots of excited fans and hopefully, peeking the interest of new listeners.

Toronto sold out. The Star Tribune lead the way in tweeting and posting the play by play of the night from the dusty mosh pit.

Chris Riemenschneider even caught the lyrics when Westerberg missed "Androgynos" and "I Will Dare." There were even a few tributes to Slim Dunlap, both in song and spirit. Westerberg announced Slim sent in his own request of "Swingin Party" for the show, and a showtune track from the first Songs For Slim installment, Ethel Merman's "Everything's Coming Up Roses" was heard in tribute as well. Unfamiliar to the band, they cranked it. Mats fans joke that imperfection equals perfection. The adventurous spirit of the Replacements is what drives the music and the energy.

One of our favorite and probably the most recognizable songs, "Alex Chilton" from Pleased To Meet Me, was caught on video. Check out the BIG STAR t-shirt.

Mr. Chilton lives on in our rock and roll hearts !!!

Takin' a Ride / I'm in Trouble / Favorite Thing / Hanging Downtown / Color Me Impressed / Tommy Gets His Tonsils Out / Kiss Me on the Bus / Androgynous / Achin' to Be / I Will Dare / Love You Till Friday / Merry Go Round / Wake Up / Borstal Breakout (Sham 69 cover) / Little Mascara / Left of the Dial / Alex Chilton / Swingin' Party / Can't Hardly Wait / Bastards of Young ENCORE: Everything's Coming Up Roses / I.O.U.

The two more shows to go are: Chicago, September 15 and Denver, September 21.

Other Articles on BBR:

A HOAX! "Har Mar Superstar (will not) Join the Replacements for Reunion Shows"