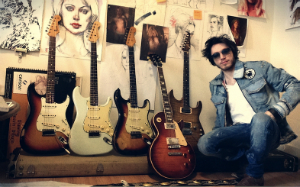 I Googled 'etiquette for writing a belated album review' and nothing popped up on the first page. To play it safe, though--in case Erma Bombeck actually wrote a segment in one of her books, this article is strictly news and commentary.

Whenever a fellow music friend brings a talented artist to my attention, I get all excited. In this case, thank you Jim. I find myself caught up in researching, in reading their bio and press, and in listening to their music (kind of like what happened to me when I first heard Joe Bonamassa's music, in June 2010).

So...let me tell you a little bit about the multi-instrumentalist, singer, songerwriter, Eric Steckel. Not only is he supremely gifted at playing the guitar, he's going to become some kids hero, one day.

At the young age of 11, the blues-rock guitarist recorded his first album, A Few Degrees Warmer (2002). He caught the eye of John Mayall early on in his career, which resulted in an invitation to tour with The Bluesbreakers in 2004 and collaborate on their album, Road Dogs, in 2005. Steckel has opened for Johnny Winter at The Paradiso in Amsterdam and shared the prime-time bill with Gregg Allman at the legendary Pistoia Blues Festival, according to his official press.

Today, at age 23, the North Carolinian has achieved milestones musicians' his senior only dream about and is, "Hailed as one of the next big things in the Blues!" Furthermore, Steckel manages every aspect of his brand, with a "do-it-yourself" attitude, a popular trend among today's independent artists. He routinely tours Europe and USA and has assembled a strong following along the way.

First off, I want to say, "Thank goodness Youtube exists." It allows me (and others) the freedom to explore an artist's back catalog and get a glimpse of them in action. And this guy, Eric Steckel, has the right amount of "swag" and "wow" factor to excite audiences of all ages.

Check out this version of "Born Under a Bad Sign".

In 2012, Steckel released his sixth album, Dismantle The Sun. (That's correct. Six albums in 10 years and he's only 23). There are 10 full-length songs, with eight original compositions. Listeners may preview and purchase the album via his website, here. 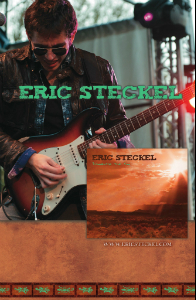 Born with a smooth, southernly accent, his gritty, vibrato, growl is most appealing for blues, blues-rock genre. I find myself rocking out to tracks, "Mississippi River", "Day Drinkin", "Found Out The Hardway", and "Outlaw". They're overflowing with southern-rock charm, greasy guitar licks, extended jams, keyboard-driven melodies, and danceable drum beats. Then, the cover of Jeff Healey's "Sugar Sweet", from Mess of Blues (2008), is a real gem. Steckel and his bandmates stay true to the original, concentrating on the baby grand piano, slide guitar and harp. Hearing "Sugar Sweet" transported me to Memphis, to Beale Street, to a couple of juke joints and shops I visited years back, where nothing but unadulterated blues and having a good time matters.

There are two ballads, "Empty Promises" and "Last Night", that have had me clicking the repeat button on my media player. A Hammond B-3 organ and piano build tension in the songs intro, before giving way to a story of heartache and lost love. "Thought I found the right woman. To ease my troubled mind. Said you'd be there for me baby. Till the end of time.." What struck me most was Steckel's guitar solo, and not just any guitar solo. Each strum grew bolder and more piercing, until it reached a wail-like crying. It moved me so profoundly, it gave me goosebumps, the way Clapton, Moore and Bonamassa can do. And "Last Night" is modern and contemporary, with Steckel on acoustic guitar, then electric for the solo. His ability to express emotions through phrasing and tone reminds me of the band Shinedown, an act he says he'd like to record with someday. His song writing is strong and his guitar technique is icing on the cake.

If mainstream radio played more artists like Eric Steckel, I'd definitely tune in.