The Charm The Fury 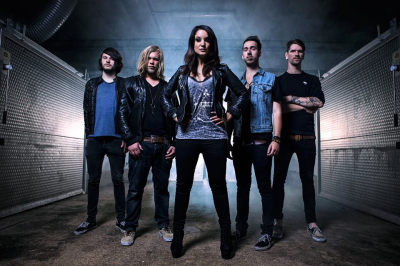 PRESS RELEASE: Unique, edgy, ferocious yet somber, The Netherland's The Charm the Fury formed in 2010 and has brilliantly managed to stand out from the crowd. The band is not only known for its harmonious but chaotic tracks, but also because of female screamer Caroline Westendorp. Caroline's vocals will turn the head of any female fronted act, as well as, give male fronted bands a severe run for their money.

Hailed as "Hollands best kept secret", The Charm The Fury, are frantically taking the globe by storm with their aggressive take on a modern day metal trend. Already leaving crowds in frenzy across multiple countries while also taking the European festivals by storm!

The new music video for their single "Carte Blanche" can be seen here:

The debut full length " A Shade Of My Former Self", released September 17, 2013 via Pavement Entertainment (North America), shows sheer progression and maturity in the bands unique sound and structure. Check out the band talking about the new album here:

The band will also embark on a hectic touring schedule with dates confirmed supporting We Came As Romans, While She Sleeps and a prolific slot at this years Warped Tour Eindhoven! Plans for a full North American tour are also in the works for complete worldwide domination.