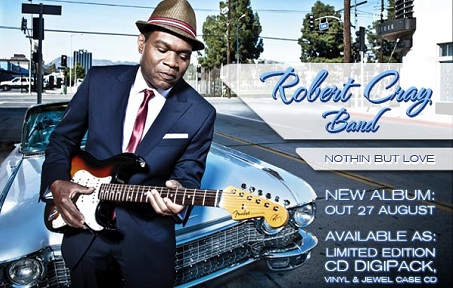 Sunday, October 27, 2013. The Robert Cray Band was welcomed back to Waterville Opera House, Maine by a predominantly mature crowd of music fans. It was evident the foursome had come to play the blues when they launched the 15-song setlist with "Phone Booth" and "Poor Johnny".

Handsomely dressed in a multi-colored, patchwork shirt and slacks, Cray doesn't show visible signs of aging. He's a timeless figure whose vocal tone, power and soulfessness--characteristics that set him apart from other singers since the beginning of his career, remain intact. Longtime bandmates Richard "Barefoot" Cousins, bass, and Jim Pugh, keyboards, drew applause, as did drummer, Les Faulkner.

"Good evening Waterville. Where have you been? I didn't leave." Cray announces, while switching out guitars between one of two Fenders, before segwaying into "Won't Be Comin Home", from Nothin But Love (2012), the latest album produced by legendary Kevin "Caveman" Shirley.

Cray continues to wow the crowd with back-to-back blues staples in "Right Next Door", "I Shiver" and "The Road Down". At various points, the audience is so caught up in the emotion (like Cray himself, who is visibly lost inside the music, with his own eyes closed, muttering to the guitar--as if commanding it to perform), several cues to cheer are missed. This prompts Robert to stop at the end of a run, look at the crowd, tap on the microphone, as if to say, 'What do you think about that?' Of course, this compelled many to shout out "Woo Hoo", "Yeah", or "Give 'er hell." It was when one fan declared, "This is good for my soul", that I could tell the bluesman was pleased.

"The next song's all about the main dish. And guys, you want to be the main dish," says Cray, with a broad smile, introducing the humorous number, "Side Dish". Before long, the crowd realizes the show is nearing the end, as Cray lays into an extended and stripped back version of "Forecast Calls For Pain". The band exits the stage to a standing ovation and returns a few minutes later for a two-song encore which includes "A Memo" and "I'm Done Crying". These two songs were worth the price of admission, alone.

Don't You Even Care

Chicken in the Kitchen

A Memo (Nothin But Love)

After a short respite, the tour continues in California on November 7, 2013. For more details on The Robert Cray band, visit the official website.

Photo courtesy of The Robert Cray band. All rights reserved. 2013.