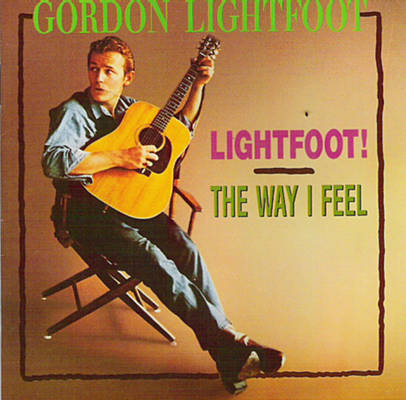 Why Do We Love Gordon Lightfoot?

Canadian singer-songwriter, Gordon Lightfoot is still going strong at beyond 80 and we wanted to give our gratitude for his music in our hearts and minds. I grew up with his music on my WABC radio. "Sundown" "If You Could Read My Mind" and "Rainy Day People" were popular tunes and his name was quickly a household word back then. His warm, textured voice is comforting in any situation. When he sings of tragedy, such as the "Wreck Of the Edmund Fitzgerald" you want to listen and hear the story, because he reflects the tales from the subject's perspective.

We got his early work, "Lightfoot!" because I stumbled across the Bob Dylan version of "Early Morning Rain" and when I realized it was originally written by Lightfoot, I had to have it. The powerful chords in the beginning set the stage for Lightfoot's voice and his round vocals fill the room with a sad sound of longing. As the song builds, when Lightfoot sings about being on the ground or alone, he holds back and the production is sparse. Once the airplane is introduced, the song takes off, with basslines in the background and you can imagine it in its glorious state. He even uses alliteration in the airplane lyrics which make them stand out, "out on runway number nine" "big seven o seven set to go""see the silver bird on high""she is weighing westward bound""and the sun always shines".  He loves the plane, and imagines it is the key to happiness. But he hates the airport, the grounded feeling of reality and facing what he has lost or missed. The song slightly slows again as he is stuck on the ground, and he repeats the use of alliteration to close the ideas of the track, "You can't jump a jet plane, like you can a freight train ... so I best be on my way, in the early morning rain."

The more you delve into Lightfoot's catalog, you will see the quiet impact he has had over music writers for generations because they love to cover his songs. I reviewed a record in honor of punk Replacements guitar hero, Slim Dunlap last year and the band proudly covered Lightfoot. Honest in blues tones and highlighted in warm singer songwriter styles, with a country vibe in some songs, he has a timeless quality. His real accounts of missing trains for just another round, makes us able to admit our own faults and maybe forgive ourselves. When Lightfoot sings of yearning and love lost, there is honor in it and it preserves the relationship. He is funny too, at the end of "Walls" we always crack up when he's depicting his 'old gray socks', how romantic, actually, to run around the back woods so carefree! There is a matter of factness in his writing, as complex as it is, that it tells the story head on, but with such mindful and beautiful imagery, it seems like a dream. "Song For A Winter's Night" is an example of this. The layering of guitar phrasing with the production of both the recorded and live versions elevates the craft to magnificence. The words, so carefully chosen to be familiar and personal, speak volumes to the listener as they too, think of their loved ones who are missed.

To Mr. Lightfoot, We hear you are still rockin' the North Country and that the Canadian citizens have adopted "The Birth of The Canadian Railroad Trilogy" as an anthem for the common people. A proud statesman, we Americans admire you!  Thank you for inspiring musicians all over the world to use your songs as their platform for expression. And thank you, Mr. Lightfoot, for giving me a comfortable place to listen when I was a child, as now those songs are shared with my daughter who loves them just as much or maybe even more. We sing "Early Morning Rain" and "Walls" at the top of our lungs in the car. These are precious memories already. THANK YOU.