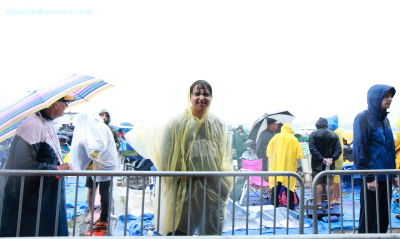 He was aware of the immediate mood of the loyal audience and after the faithful crew swept the rain from the stage so the equipment would function, he opened his set with "Water." From the same titled record, it quickly pulled the atmosphere into a peaceful vibe that made us know we were a community. If you haven't picked up this previous record, give it a listen. It is understated, smooth and brilliant, spanning topics that range from love to cultural history. Porter speaks honestly. He sings carefully, as if every note has a message.

"On My Way To Harlem" lifted spirits and got the dance crowd moving. (From Be Good). It was really hard for people to remain seated, given that their chairs and blankets were wet and then listening to Porter, everyone wanted to groove. Security tried to section people who were up and dancing from the folks who wanted to watch the show from their lawn chairs so everyone could see. For most of us, hearing Porter, with his golden sound that beaconed across the gray sky was enough.

Tivon Pennicott mastered the sax, while Chip Crawford on the piano was heroic. This is a complicated tune with many sections and directions, but somehow the band made it so easy. If you listen to the lyrics, Porter reveals his own inspirations, Marvin Gaye being front and center, with Duke Ellington by his side. 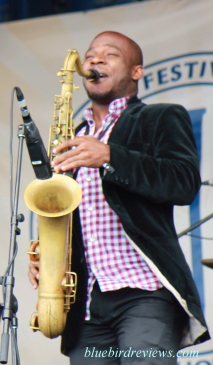 When I first saw Gregory Porter here last year, it was "No Love Dying" that hooked. From his Grammy Award winning album, Liquid Spirit, this was the baptism that the crowd was waiting for. People were singing, swaying, hugging each other, and just looking up at the rain to let it pour down on them. I've never been in a more serene place. It was a moment that I, along with the 6+ thousand who showed up that day, will surely remember.

Gregory Porter not only knows how to charm a crowd, but his wife's birthday was honored and he sung her off of her feet as well. "I Love You, For Sentimental Reasons" and a slow groove rendition of Sam Cooke's "You Send Me," made it her special day, while the fans danced along in the audience.

Probably the highlight for Porter followers came at the end during, "1960 What?" also from the Water album. For Gregory Porter and the band, the music comes from the soul, but it's also a catalyst for change. It was the younger generations of the crowd who seemed to really dig the funky, psychedelic swirl of winds at attention, while Emanuel Harold and Aaron James laid out the beat in the rhythm section. The song told a story, though, a serious one of discrimination in Detroit, paying tribute to Motor City during the burning riots in 1967. 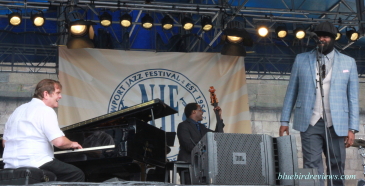 On My Way To Harlem 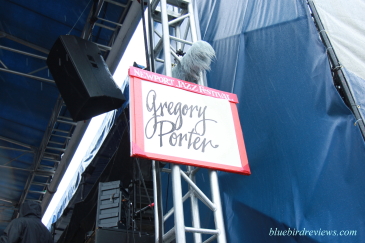 I Love You For Sentimental Reasons – You Send Me

Photos of the Newport Jazz Festival 2014 by Bluebirdreviews on Google

Many thanks to Ken Franckling for edits to this article.