Gregory Porter and Tomás Doncker will headline The Harlem Arts Salon's all-star benefit fundraiser for The Gloster Project on Sunday, March 8, 2015 from 2:00 - 6:00 PM. The benefit concert will take place at MIST Harlem, located at 46 West 116 Street in Harlem, and will feature art, music, poetry, a buffet lunch, an exhibition/silent auction, and a special appearance by Danny Glover. 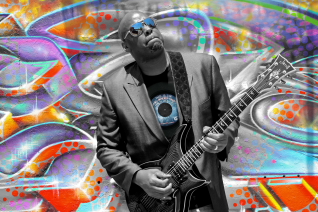 Tomás Doncker's "global soul" and blues music has earned him acclaim from CNN and Guitar World as well as a critically acclaimed run at NYC Summerstage 2013. From his humble beginnings as the son of a carpenter, Yusef Komunyakaa has traveled far and wide to become a scholar, professor, and Pulitzer prize-winning poet.

In 2010, Doncker performed for the first time in China as a headlining act at the Shanghai Folk Festival, and in front of an audience of over 100,000 as part of the Shanghai World Expo. His latest work as a singer/songwriter and producer embraces a broader musical vision that he likes to call Global-Soul, drawing influences from numerous sources, including East and West Africa and the Caribbean. He also frequently collaborates with legendary Grammy Award winning Producer/Bassist Bill Laswell, and his ongoing "Power Of The Trinity" project was featured on CNN on November 27, 2012 (Jimi Hendrix' birthday).

On July 8th, 2014, Tomás released the full length "Moanin' at Midnight: The Howlin' Wolf Project" album, which received widespread acclaim from sources such as Popmatters, All About Jazz, and Howlin' Wolf's own official website, who posted the album. Developed during a critically acclaimed run at NYC SummerStage during the summer of 2013 (and directed by award winning director Alfred Preisser), this project is now being shaped into a multimedia performance concert.

Tomás's latest release is a collaborative effort with legendary poet Yusef Komunyakaa entitled "Big Apple Blues, due October 21st via True Groove Records. The album is intended as a follow up to "Moanin' at Midnight".

Gregory Porter Photo by Bluebirdreviews 2014 at the Newport Jazz Fest

Photo of Tomas Doncker provided by his press team.