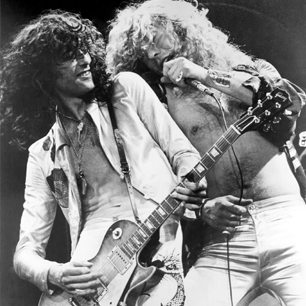 When other websites do those surveys of your favorite Led Zeppelin this or that song, my answer is always, "Ten Years Gone." Physical Graffiti is probably a favorite Zeppelin album of mine too; the Immigrant Song, Down By The Seaside, The Rover, In My Time of Dying, all musical masterpieces. But am I biased because Ten Years Gone is on it too?

The song quietly sneaks up on you with the first riffs and then another of Page's 14 guitar tracks that he used to structure the song comes in with a solid, powerful and under the earth harmony. This initial root grabs you and the seed is sewn for Robert Plant's somber, wise and poetic voice.

The song was written without lyrics by Jimmy Page and Plant added the lyrics later.

In an interview with Rolling Stone magazine (March 13, 1975) the interviewer, Cameron Crowe, asked Robert Plant what gambles he had taken. Plant replied: "Let me tell you a little story behind the song 'Ten Years Gone' on our new album. I was working my ass off before joining Zeppelin. A lady I really dearly loved said, 'Right. It's me or your fans.' Not that I had fans, but I said, 'I can't stop, I've got to keep going.' She's quite content these days, I imagine. She's got a washing machine that works by itself and a little sports-car. We wouldn't have anything to say anymore. I could probably relate to her, but she couldn't relate to me. I'd be smiling too much. Ten years gone, I'm afraid. Anyway, there's a gamble for you."' (From Songfacts.com).

These lyrics to me, though, are not about one specific love story, they are about the love story that you have with life. This song is mind bending because of the intensity of Plant and Page. The bridge builds and builds, then floats back to the initial harmony. The eagle coming back to the nest, back to the original love, the music, the life; the soul that give us the dreams that will last longer than ten years. Our dreams will be surprising sometimes, vixens will come and go, but this song goes on and on. And just when you think its over, there is more to discover in Jimmy's brilliant reworking of the intricate phrasing. He makes it louder, stronger- more powerful- yet keeps the familiar and the quiet simultaneously. It speaks to our lives, if we have the courage to pursue dreams, it is a journey, yet we return to ourselves, who we are. The conflict is understandable, but we need to expand persepectives in order to keep our selves intact.

The bass line and drums on this song support Jimmy's melding of the ebbs and flows. Bonham and JPJ wrap the song around Jimmy. Some say this is one of the songs in which you can hear Bonzo's drum pedal squeak. This song is very Zeppelin to me, if that is possible to define. Plant's understated voice keeps the theme poignant, but the guitar tells the story. And the accents of JPJ and Bonham, especially when he's slamming those cymbals at the right time, it closes the book on the topic without the need for an editor.

As usual, Page's brilliance stands alone. But alongside him is John Paul Jones, originally starting with an acoustic guitar (Ovation Balladeer 12 Roundback), but later was playing an unusual (Manson) triple neck guitar that included a six string, twelve string, mandolin and a bass pedal. Playing this live became cumbersome for the band and they eventually dropped it from their stage set.

Jimmy Page re-recorded "Ten Years Gone" with the Black Crowes for the album, Live at the Greek and it was #33 on the US Billboard Hot Mainstream Tracks Chart. Mr. Page said in an NPR interview in June of 2003:

We did "Ten Years Gone" and all of a sudden I heard all of the guitar parts that I had never heard apart from on record. We could never do all those guitar parts with just the one guitar with Led Zeppelin. It was fantastic.

Here is the original "Ten Years Gone" from Led Zeppelin.