I've seen Deep Purple live in the 1980's and my neighbor toured with Blackmore's Knights. With all of this great rock exposure, how could I have missed the career of Glenn Hughes? Back then, I wasn't writing about music, I just listened - and I knew what I liked -without thinking about why. But time is my friend. The sounds followed me like an afternoon shadow, delightfully haunting. And when I turned to see from whence they came, I was happily spinning about. Thanks Mick, for shining the light on Glenn Hughes.

The following is part of a series of articles with Dr. Mudd/Shinebox bass player, Mick Houser.

What do you have to say about Mr. Hughes this month? 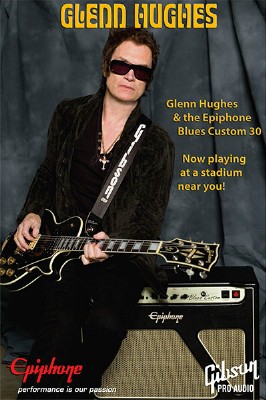 This "starts with a nice little Jimi Hendrix riff but quickly evolves into a bluesy R&B number with warm, rich vocal tones. Tony Franklin does some really cool multi-tracked bass work on this one, which really livens up the mix. Guitarist Craig Erickson plays rhythm on all album tracks, but also lead on this track."

I love deep cuts in rock and I love deeper cuts in soul even better. I think Glenn Hughes is a 'soul man".  Am I right, Mick?

"... some listeners call Glenn Hughes the 'white Stevie Wonder. Oh, absolutely a soul man. Rumor has it Ritchie Blackmore quit Deep Purple because he felt David Coverdale and Glenn Hughes were taking the band in too much of a soul direction, as opposed to the hard-driving blues sound he wanted."

"You Don't Have To Save Me Anymore,"  from LA Blues Authority. This time Tony Franklin takes a much better bass solo, complete with really tasty harmonic slides on the fretless bass. Warren DiMartini (Ratt) and Mark Kendall (Great White) on guitars. Would have made the late  Screamin' Jay Hawkins (I Put A Spell On You) proud.

Tell me everything you know about the fretless bass.

"Fretless bass is just like any other bass but with the frets removed (or designed without frets in the first place) so it has a smooth flowing feel when played the way guys like Tony Franklin play. Most of the classical stringed instruments are fretless such as violins, violas, cellos, etc... With frets, there is not much control over the sharpness or flatness of the note, except for string bending and vibrato. On a fretless, wherever you place your finger that's the note value you're going to get...since there are no frets in front of your finger, your finger essentially becomes the fret, in a manner of speaking. So wherever you move your finger, that's where the note is, and it may be a touch sharp or flat, regardless of bending or vibrato. You can usually tell a fretless by the warm richness of the sound and smooth sliding transitions from note to note. Tony Franklin is a master of the fretless and inspired me to buy one several years ago. I used it so much I wore the neck out. I haven't replaced it because good fretless basses need to have very durable fretboards due to excessive wear based on the uniqueness of the way they are played as compared to fretted basses...and this tends to make them somewhat expensive."

"Fretless is not common in the rock world, although not unheard of (ie, the aforementioned Tony Franklin (The Firm/Blue Murder/David Gilmore); Pino Palladino (The Who, John Mayer, many studio sessions); Bill Wyman (Rolling Stones); Jack Bruce (Cream); Tony Levin (Peter Gabriel and others); Sting (The Police); Jeff Ament (Pearl Jam); Les Claypool (Primus); John Deacon (Queen); even John Paul Jones of Led Zeppelin on select tracks such as In My Time Of Dying). A lot of these guys switch off between fretted and fretless basses, not necessarily using fretless exclusively."

However in jazz, fretless is much more common, with the great advocates too numerous to mention but very notably the incredible Victor Wooten and perhaps the most influential bass player of all time, the late great Jaco Pastorius, who is very closely associated with the use of fretless basses.

Taking it a step further, or a step backward, if you like, before the advent of electric basses, all upright, so-called "dog house" basses, or bass violins, were and are still fretless. A lot of classic pop recordings up until the late '50 and very early '60s still incorporated the use of "stand-up" basses more so than their electric counterparts. After that time, the upright was used in rock more as a chosen flavor than a necessity (ie, The Stray Cats, The Reverend Horton Heat, and typically a lot of throwback records or Americana music, including such new items as Robert Plant's Band Of Joy on select numbers, or so I witnessed when I saw them a couple months ago). The upright has always remained a staple to this date in jazz, blues, and especially classical music.

I wore out my fretless because of the unique method of achieving vibrato on the instrument, using more of a side-to-side motion, rather than an up and down motion like you would with a fretted instrument, although both methods will eventually cause wear, and I, in fact, am apt to use both techniques and a fair amount of string bending. In addition, the type of strings I used (roundwound instead of flatwound) quickly dug grooves into the fretboard, but that was the price of getting a brighter, richer, louder tone. I had the neck sanded down and refinished as many times as I could until there wasn't enough fretboard left to sand down any further. Nowadays they make fretboards out of much more dense and stronger materials, including harder woods and synthetics like graphite, which play better and wear less, but are also much more expensive.