A Bowie Celebration - "...Just For One Day!" - A complete A-Z and FAQ on how to access the biggest streamed online concert ever, featuring Pianist, Composer and The Mind behind the event, Mike Garson 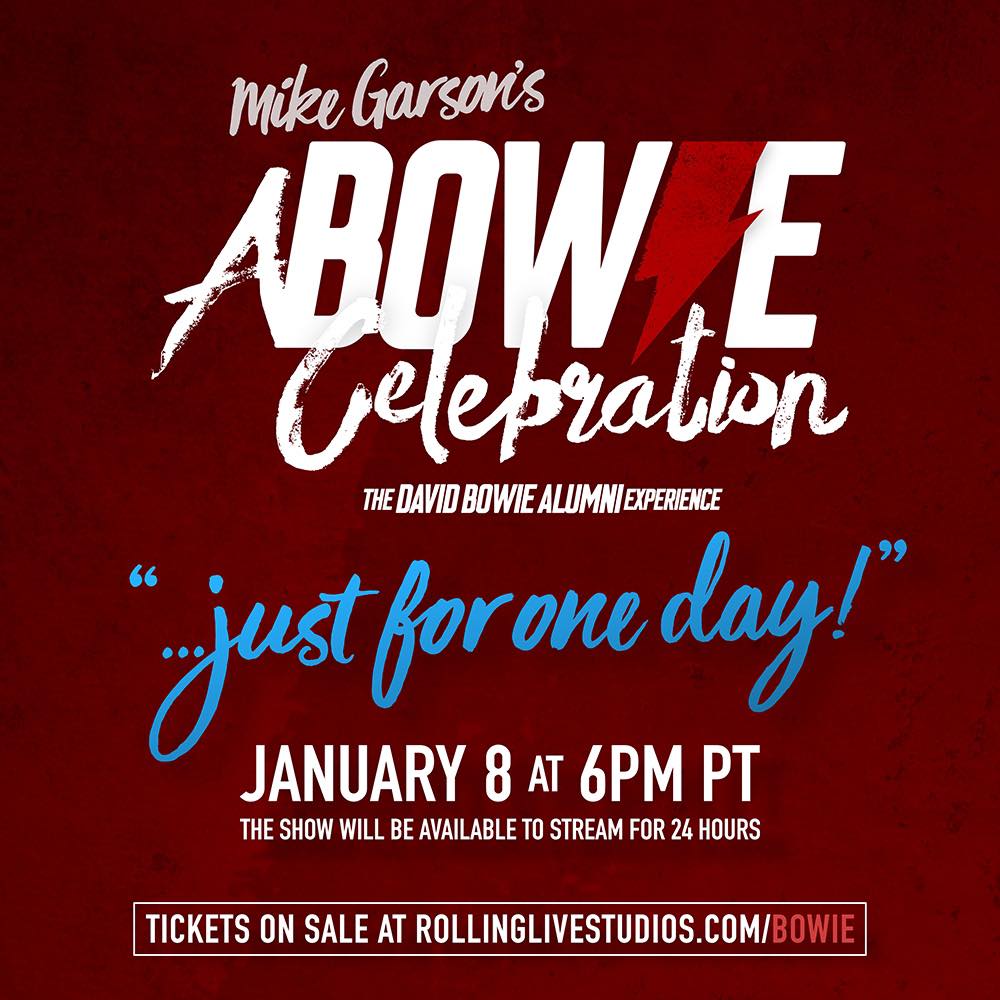 When the late great David Bowie passed sadly away,  on 10th January 2016, just after he announced the release of his latest album Blackstar, to the pianist and composer Mike Garson, who had been for more than 4 decades working for one of the greatest musical genius of this century, it must have felt like a robust and important part of his personal and artistic life had been abruptly taken away from him.

Following Bowie's passing, together with releasing several solo albums, Garson had also been touring the world with his project A Bowie Celebration, a project that would involve some of the finest alumni/musicians who, just like Garson, had been working with David Bowie throughout the years or may have heavily influenced by the enormous talent of the late great British singer/songwriter.

To commemorate Bowie's 5th Anniversary of his passing, Garson had long thought of organizing a very special live event on stage, together with the Alumni of the A Bowie Celebration project. Sadly, though and due to the pandemic that has been and still heavily affecting every layer of society worldwide, including music, Garson had to re-jiggle in a total, different way his initial plans.

They’ll join Alumni members of Bowie’s bands spanning each of Bowie's studio albums, from his 1969 self-titled album through his final album, Blackstar including Grammy Award-winning guitar legend Peter Frampton, who was childhood friends with David Bowie and was featured on his Never Let Me Down album and his Glass Spider tour. Also joining this incredible cast of musicians is Grammy Award-winning saxophone phenomenon David Sanborn who recorded on the Young Americans album and was featured on Bowie’s Diamond Dogs tour. Yes keyboardist Rick Wakeman Music also joins the cast, having played piano on Bowie’s Space Oddity, Hunky Dory and the Ziggy Stardust and the Spiders from Mars albums.

Special Guest appearances will also be made by Nandi Bushell, Mr Hudson, Gaby Moreno, Joe Sumner, Simon Westbrook, and The Section Quartet. Tickets are on sale and have been for a while now and a variety of VIP Ticket bundles are available,  offering fans exclusive opportunities and merchandise, including everything from access to pre-show sound-check and an After-show Q&A with members of the band. To purchase tickets for what promises to be a unique event in the music history for the richness of its cast, you can visit the link RollingLiveStudios.com/Bowie/. 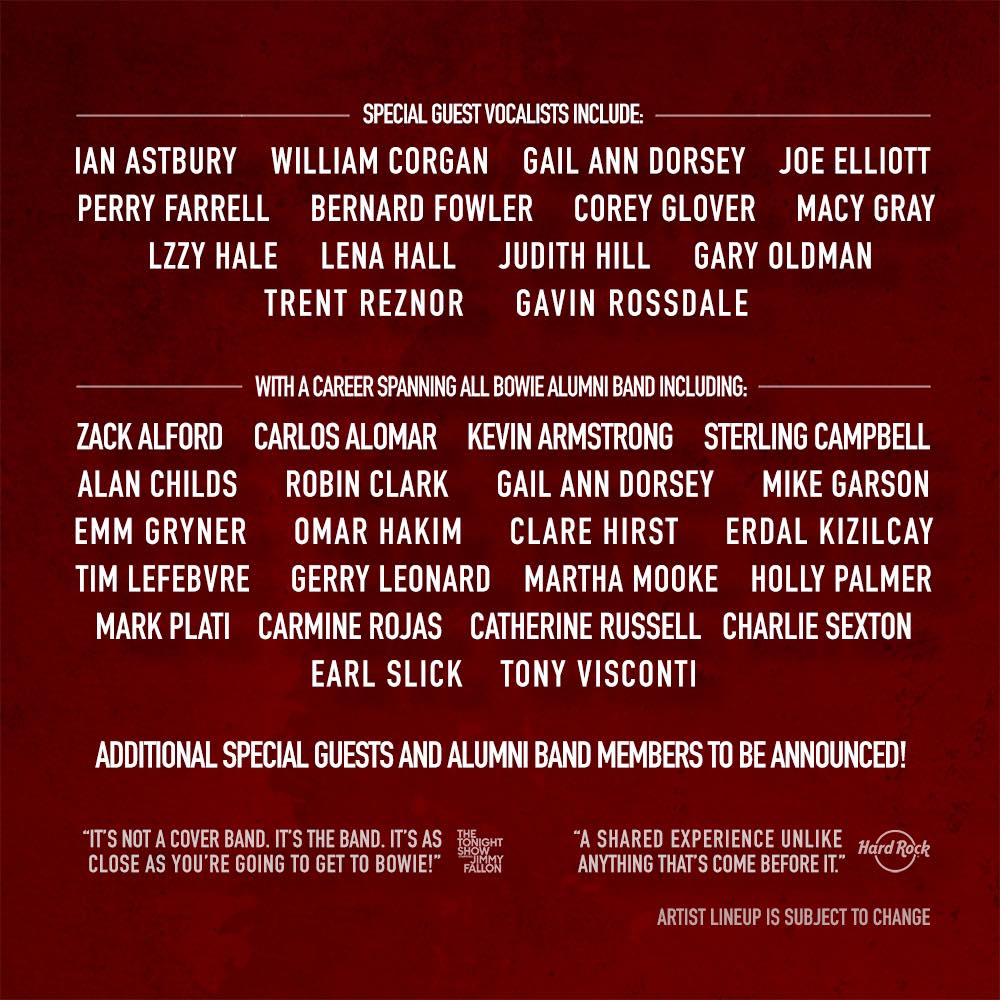 We had the privilege to talk to The Man and The Mind behind this very Special Event as a sort of Frequently Asked Questions, on tickets, streaming time and much more, on something that can be easily called the streaming equivalent of Live Aid or Woodstock online, Mike Garson himself.

BR - Did you actually follow a specific criteria in choosing the Guest Stars appearing for this very Special Online Concert?

MG - To me, the criteria had to be that each musician or artist had to be connected to David's work in a very deep way, people like, for example, just on top of my head, Trent Reznor or Billy Corgan. Or, perhaps, influenced, artistically by David, in certain ways, like this incredible young British artist called YUNGBLUD. The fact that some artists like YUNGBLUD might have not even been born, at the time that David was still among us, it just goes to show how much Bowie's work as a composer, a singer, a performer, has affected generations of artists, not only musicians but every type of art form, of the past, present, as I am sure, future as well.

BR - When did you come up with the idea of creating this very special concert in memory of David?

MG - The truth is that I have been thinking about touring this January for the last two years. I had this show in mind and the show for the follow year as well, to commemorate what it would have been David's 75th birthday. Yes, as I said, I supposed to be on Tour this coming January to celebrate this event live on a stage. As a consequence of this pandemic, though, I had to cancel it all but I did not want to disappoint the fans, at the same time. I had thoughts of doing something a little low-key, like arranging a live streamed video call kind of thing with Alumni and fellow Artists but then, I realized that there was so many people in the industry begging me to be part of the project, that I thought: "Maybe if my good friend Gail (Ann Dorsey, bass player and singer/songwriter) is in, then I shall do it". Why Gail? Because she did the first year of the A Bowie Celebration Tour with me 4 years ago and she hadn't done it since, therefore I thought: "If Gail is not into this project, then perhaps it never meant to be". But then it transpired that Gail was totally into it. From that point on, the chain reaction started, with Carlos Alomar, Gerry Leonard, Matt Chamberlain, Mark Plati, Sterling Campbell, Carmine Rojas and the list goes on and on wanting to be part of this. I spent and still spend every day arranging, creating, writing, composing and modifying accordingly each of the songs that will be performed on the day. As you can imagine, with all the fellow Alumni and other artists living in all different parts of the US, to put all the parts together, it is part of a gigantic puzzle. A puzzle that involves engineers and mixers to make each song sound outstandingly well and, as you may appreciate, it is sonically a huge task but fascinating too, at the same time. I have applied all my musicianship and still do, every single day, to try and satisfy all the millions of Bowie fans around the world and, despite working with a very challenging format, like a video streaming, I am sure the outcome will blow many people's mind. I am aware that this is a massive endeavour and there are not many hours left for me, during each day, where I am not working on this concert but I am loving the ride very much and I treat each of the songs that will be broadcasted on the 8th January with the greatest love, joy and respect. I hope that all those that will purchase the tickets will love the show, as much as I am enjoying whilst preparing it.

BR - Mike, can we please clarify, for all our readers and all the million of fans that, we are sure, will purchase the tickets to watch the show, how the time zone difference will work, in terms of being able to watch and enjoy the show, for those not living in the United States?

MG - The show will be broadcasted for 24 hours, therefore, for those who have purchased the ticket but do not wish or cannot watch it live the first time around, at 2 or 3am US Time, in many locations in Europe or other parts of the world, they can all be reassured that they can watch the show in the comfort of their houses at the most suitable time for them, within the 24 hours once the show has been broadcasted for the first time. I thank you for this question, because I was asked many times by the fans on how to buy the tickets, to login into the site that will be broadcasting the show and last, but not least, how to watch the show at a more doable time for them. I feel like I might have lost several thousands of tickets, because many, unfortunately, do not understand yet the concept of purchasing tickets for online streaming shows, being a brand new thing for them. Once a ticket has been purchased, every buyer will receive login codes that will allow them to access the streaming and all will be explained on the automated email they will receive, once a ticket has been purchased. It is important also to mention that there are no limits for tickets, like, if you want to purchase one, two or ten, for example, you can, because the good thing about an online streaming concert, it is that it's not like a venue, where once you reach the maximum capacity of it, then tickets are sold out. The online platform ensures that there is an unlimited amount of tickets available that can be acquired, with $2 for each ticket purchased that will go to  a charity organization and with a wide choice of different ticket packets you can choose and purchase.

BR - How complicated has it been, Mike, to assemble all the musical parts together, the pre and post-production phase, mixing and engineering all the sang and played parts you received so far from each musician and singer?

MG - (Smiles) You are asking me about something that may have happened in the past but, the reality is, that I am still working on it now, as we speak! It is immense, I have never worked on something of this scale in all my life and career. But the way you get through it, or at least, I do, it is that you do it, but you get out on your own way. That doesn't mean that you don't do the work; you do that, but in the right way. If you try to run it as a control freak, you risk to screw everything. It's that kind of fine balance of channeling the whole, stepping aside and letting it all flow. But to say that it is not a lot of work, it'd mean that I am lying; to say that it is not a lot of fun, it'd mean that I would be lying and to say that I am done with it, that would mean that I'd be lying as well, because I am far from finishing it. But it is flowing extraordinarily well, that much I can tell you.

BR - After almost five years of David's passing, what is the best memory that you have, about all the years you spent together in studio and on tour?

MG - Hard question. There is not a simple answer to that, besides how much David's presence has impacted my life. I didn't know the guy, when I got the initial call, more than four decades ago, at the Aladdin Sane time and I didn't know a single thing about Rock And Roll, having practiced Classical and Jazz music all my life, before meeting David, then becoming a Classical composer and a Jazz pianist. Part of my music being so well known, through the years, by certain Rock And Roll fans or fellow artists, it is undoubtedly because of my work with David, something that had a massive influence on my career and still does. Ironically, though, not as much when David was alive but now, because I have been touring the A Bowie Celebration project for the last four years. I hope that many will join us on 8th January, because I can promise you that you will all love every minute of it.

Ticket on sale at Rollinglivestudios.com/Bowie.