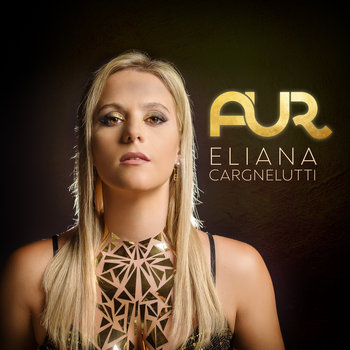 It took almost 6 years and a global pandemic that forced to stop her touring around Europe for Italian Guitar prodigy and singer/songwriter Eliana Cargnelutti to find the time to work on a new studio album.

The resonance of her 2015's previous studio record, called Electric Woman, had created quite a buzz around the whole of Italy and Europe, thanks to a winning formula of slick guitar playing, powerful Hard-Rock tunes and inspired songs, making the talented Italian artist one of the most loved guitar playing in the Old Continent.

Most fans have been asking Cargnelutti for quite a while when she would have released a brand new studio record and surely, given the extreme time of the world that we are all living now, musicians included, the Italian guitarist might have thought that this was the right time to channel her artistic focus on working on a new record.

And what a very interesting new album this is. Cargnelutti's new record is called Aur and, unless you are an Italian living in the North-East (where the artist herself comes from) of that beautiful country, it might take a while for you to work out that the word, in the local dialect, it means "Gold", just as the album title may hint to, written in bright yellow on the cover.

Aur is most certainly a record that sees a significant growth not only in Eliana Cargnelutti as an artist but also as an individual. Lyrically, the album shows a lot of maturity in its overall context, pointing often to topics related to passion, fear of abandon, anger and hopes, all feelings coming sooner or later in everyone's life, at a certain point.

It is important to highlight the fact that Cargnelutti has self-produced the new record, something that has given the Italian guitarist a lot more freedom, stylistically speaking and that confidence to measure herself with new ideas and new sonic direction.

Whilst Eliana Cargnelutti knows very well how to create and perfectly shape a Rock tune, like she so well does on songs like Who Is The Monster?, I Won't Change and Diablo's Fire, for example, it's highly pleasing to hear the way she managed to combine Hard Rock and R&B in such a creative and successful way on the tune called I Don't Know, where also another renowned Rock Guitar Prodigy, Ana Popovic, appears as a Special Guest on one of the most pleasing sonic experiments present within Aur.

The Italian singer/songwriter is aware of the fact that her high guitar playing skills, combined with a singing voice that gets better on each passing album, can allow Cargnelutti to trespass easily music genres she is not totally familiar with, through her many musical talents with extraordinary simplicity and effectivity, like she does really well on the Rootsy-flavored song called Love Letters.

As previously mentioned, Eliana Cargnelutti's artistic growth present in Aur is not only displayed through her guitar playing great ability and inspired songs but also through the strength and the maturity of her voice. Although, throughout the entirety of Aur, the Italian singer/songwriter shows plenty of swagger and confidence into her vocal range, especially in the more uptempo tunes, it is in the last two songs called Alone and, in particular, I Swear, closing Cargnelutti's new record, that her vocal strength emerges overwhelmingly in its full splendor.

Some might have sang, in a famous song and in the past, that "...All that glitter ain't gold.." but that is not certainly the case of an album like Eliana Cargnelutti's Aur, a record that shines a lot in many different ways and that, sure enough, will pave for an even longer length, this time, Cargnelutti's own personal Yellow Brick Road to global stardom.

Eliana Cargnelutti's Aur is due to be released on May 7, 2021 and it can already pre-ordered on the artist's Bandcamp Page