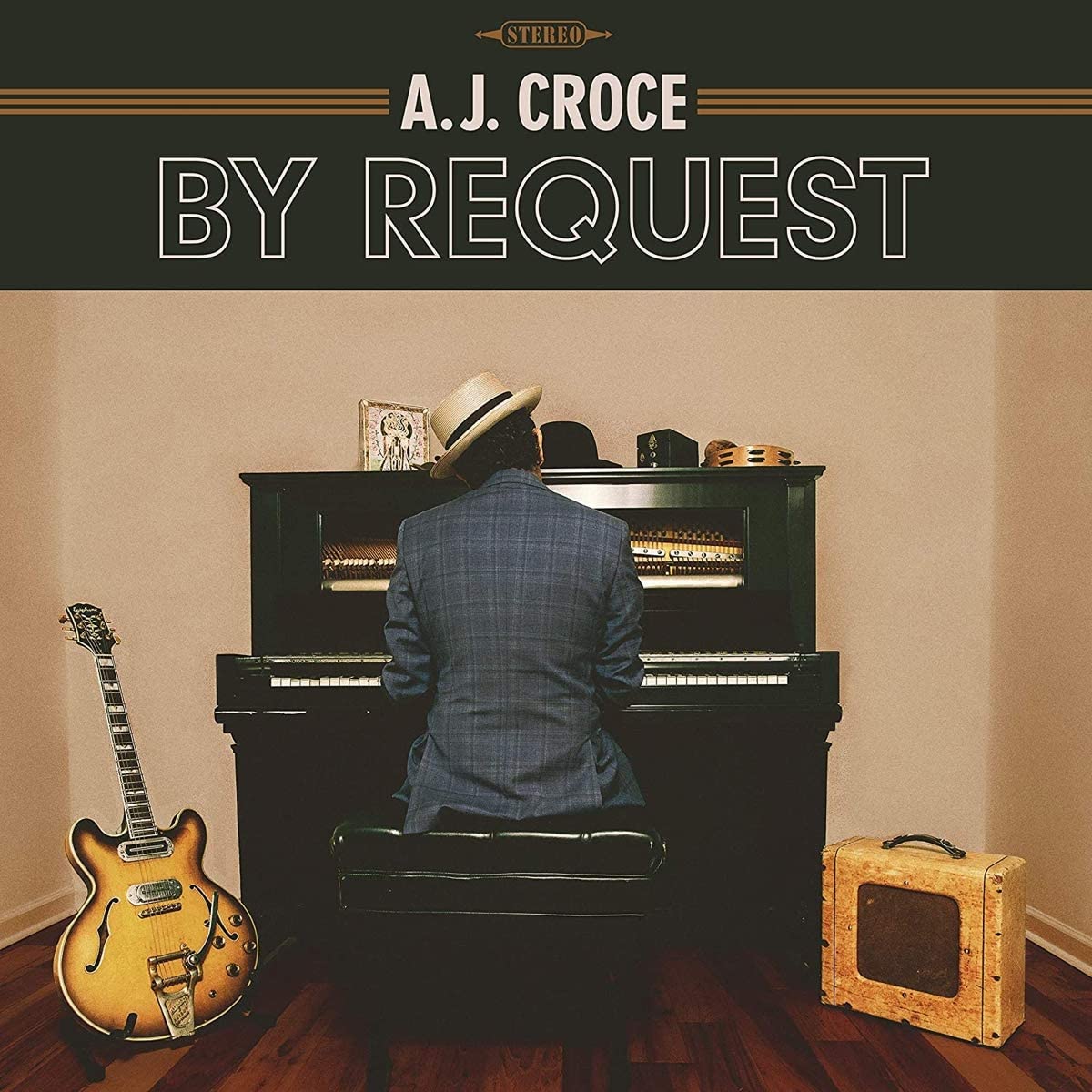 It's always exciting, for who writes about music, to discover every time new angles in the infinite power that this art form exercises on human being. While some music artists often find refuge into it, using music almost as a platform for self-therapy, others search passionately for strength or feel-good vibes, so to be able to exorcise some negative karma running into their everyday's lives.

With that in mind, the new album of the American prodigy Pianist and singer/songwriter A.J. Croce, called By Request, it marries perfectly those aforementioned state of minds, adding to them electrifying sparks of joy and nostalgia at the same time too to a record that, in our opinion, it makes Croce's new release be one of the most inspired chapters of the artist's glorious music career to date.

By Request is an album born through the desire of the American artist to pay homage to fellow artists he has long admired, through the years, by applying, in each of the 12 songs included in the record, his own inimitable style and unique interpretation. The album reflects pretty much Croce's past and present love and respect for those artists and some of their songs, which have been and still are, particularly meaningful to the singer/songwriter's heart, so much so that one can immediately perceive the passion and the enormous devotion permeating in those songs as soon as Track 1 kicks in, through Croce's soulful and strong vocal deliveries.

The American artist has stated, while presenting the record to the press, that he felt By Request as a way to invite over people to Croce's place for a private gathering, where the Piano Virtuoso would take requests from his invitees about any sort of music style belonging to any era. Needless to say, Croce succeeded in full in expressing his vision, thanks to an explosive mix of Soul, R&B, Blues, Boogie and Rock'n'Roll of the finest quality that never lacks in intensity, power and great originality at any point of this remarkable body of work.

Croce chose accurately each track included into By Request, respecting the original versions  with great class and finesse but ensuring also, at the same time, to put his own personal stamp on each tune. By translating every song with his own artistic vision and instinct, the singer/songwriter gave to them a discreet but highly uplifting face-lift, enticing the listener right from the start, through a highly-fueled R&B version of Billy Preston's Nothing From Nothing.

The American Piano Maestro is absolutely unstoppable in every step of the way, in this magnificent album and to chose one or few highlights off By Request, it would disrespect enormously the magnitude of Croce's new record. From the heartfelt version of Neil Young's Only Love Can Break Your Heart to a glorious version of Brownie McGee's Better Day (with Robben Ford as Special Guest on guitar), By Request is not only a personal journey through Croce's musical memories but it is also an emotional, sonic roller coaster that will make you smile, dance and move the listener through the alleyways of the heart with extreme grace and  elegance every step of the way.

Croce swims freely into 60's New Orleans R&B and Boogie layers of sound, at times, especially in songs like Allen Toussaint's Brickyard Blues, Randy Newman's Have You Seen My Baby and Sam Cooke's Nothing Can Change This Love, adding to his fabulous delivery on piano and vocals also the excellent work made by Croce's Horn section, made by Scotty Huff, Jim Hoke and Josh Scalf, particularly on Randy Newman's cover.

One of Croce's many talents, it is to be able to re-dress some songs in unexpected fashion and revealing them in a completely new form. Whilst Tom Waits' San Diego Serenade represents one of the finest ever recorded version of this song, where Croce's enormous talent as a singer and as a Piano Virtuoso takes completely center stage, it is The Beach Boys' Sail On Sailor that takes everyone completely by surprise, delivering a very intense and hypnotic Blues version of the Masters Of Surf's original.

A musical private gathering like the one offered by A.J. Croce on By Request, it can never be complete without a free-form, uptempo instrumental tune that makes everybody dancing; Shorty Long's classic Ain't No Justice is treated by Croce with enormous swagger and musical ability, seeing off the album in absolute uplifting style.

By Request is one of those rare records that one can not avoid to fall in love with; charming, entertaining, played, sung and arranged with superior class, Croce's new release is the ultimate example of the American singer/songwriter talent at 360 degrees. By the same token, By Request is also a magnificent reminder of the history and tradition of American Music of the last half a century, executed with enormous respect and artistic integrity by A.J. Croce. One of the most brilliant and inspired releases of 2021 to date.