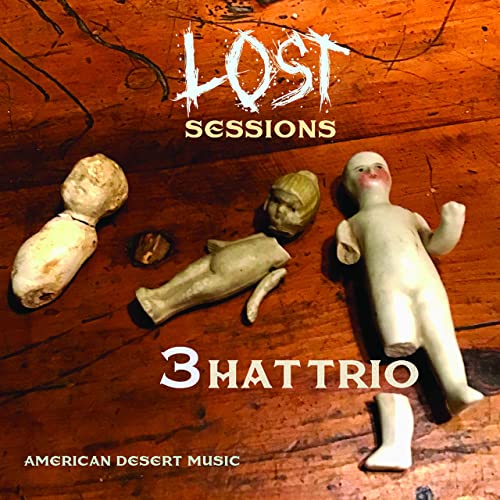 Since they formed as a band back in 2013, Utah-based 3Hattrio has been developing, through the years, a truly unique music formula, based on layers of Desert Music mixed with elements of New Age and Electronica. This highly unusual but greatly evocative sonic alchemy created by the American band, has brought 3Hattrio to worldwide general consensus, especially through records like their 2018's Lord Of the Desert and, more recently, Live At Zion, released towards the end of 2019.

The brand new album just released by this highly dynamic and fascinatingly eclectic trio, called Lost Sessions, has a really interesting backstory; in 2020, after completing the recording of the material included in what then became the Lost Sessions album, the band was heartbroken in witnessing the hard drive that contained the audio files of the new record being crushed by a falling piano. Later that year, Greg Istock found a company that specialized in retrieving lost data from crushed hard drives. Initial efforts made by this company were encouraging, with some files revealing themselves. A fresh drive with the recoverable data was promised to be delivered shortly to the band by this company, however, on arrival, this new drive was entirely blank, much to the disappointment of the American collective. A call to the company in question failed to offer much cause for hope. But just when all seemed lost forever, it came as a welcomed surprise, to 3Hattrio, then to receive a package, out of the blue and a couple a months late, containing a hard drive loaded with recognisable file names. Those files they thought were never to be recovered again.

It would have been an injustice of a massive scale for the whole world of music, should those files got lost forever, because what 3Hattrio put together in these sessions, they are some of the best songs that this formidable collective has ever recorded to date.

The Lost Sessions album showcases a trio of highly talented musicians flexing their skills and abilities to their maximum on each of the tracks included in their new record, by using their instruments in a more amplified, but still very organic fashion. The use of the upright bass, just as an example, on Lost Sessions, played in a style that goes beyond the traditional use of the instrument per se, with Istock almost recreating the sound of a synth pad, it is a clear example of how Wrankle, Istock and Cannon wished to stretch even further, through their new record, the potential of their instruments as far as they possibly could, building, in this way, some truly new and magnificently breathtaking sonic carpets

.
Another exciting aspect in the making of 3Hattrio's new album, it is the idea of using vocals not as the focal point of each song, but rather being incorporated into the tune itself, simply by sampling and occasionally distorting Cannon's vocals and merging them within the musical structure, using them, effectively, as an extra added instrument.

The mood and the vibes expressed by the American collective's new album constitute the soundscape of each of the band members’ musical vision (although Istock has, in this occasion, provided his leadership into the production, mixing and arranging aspects of the album's songs) and it is utterly fascinating to discover the way in which Cannon, Wrankle and Istock apply their individual improvisational skills at the core of their songs, to then mashing them all together in 10 tracks of extraordinarily organic sonic escapism.

From the delicate, almost dreaming violin overture provided by Wrankle on the tune called Never Going Home to the powerfully dramatic improvisational interplay generated by Istock's upright bass and Hal Cannon's distorted banjo sound in the instrumental suite called Disquieting, Lost Sessions is a swirling kaleidoscope of light and darkness, joy and tension.  But, most importantly, it is an album played with extreme elegance and perfect musical cohesion by a highly talented ensemble of musicians.

3Hattrio's Lost Records is one of the most surprising and enthralling records of 2021 so far and, undoubtedly, the Utah-based collective ultimate masterpiece.