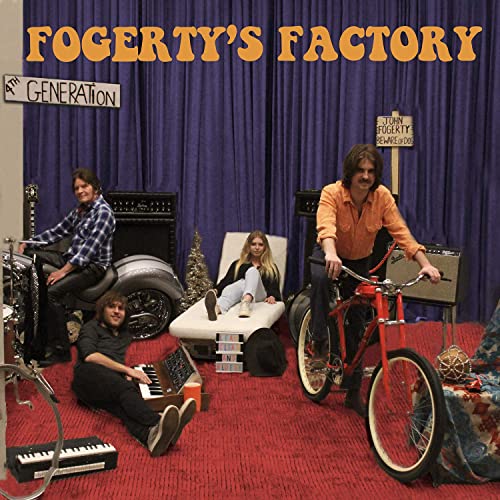 There is no doubt that 2020 was a very tough year for the whole world. In particular, the category of musicians is among those that have suffered even more, from the impact of the pandemic, due to the total lack of live performances which, for almost 18 months now, has struck and still affects the beating heart of a wonderful art-form like music and, consequently, the livelihoods of million of artists worldwide.

For Fogerty, however, despite the forced inability of not playing live, 2020 was a year that allowed him though to spend a little more time with his family, with his wife Julie and his sons Shane, Tyler and Kelsy, with the latter spending a great deal of time with their father, playing together in the artist's recording studio inside his home.

These family music sessions held in Fogerty's studio, in which Fogerty and his sons enjoyed enormously playing some old classics of the legendary American musician's songbook, began to be disclosed last yearn on YouTube, through a series in which, once a week, Fogerty and family released a video of a song from Fogerty's repertoire, either as a solo artist or recorded with Creedence Clearwater Revival.

The idea that flashed to the singer/songwriter and his family to share these songs via a platform like YouTube, it attracted the curiosity of more than 8 million viewers, with Fogerty who, some time later, confessed that his boys had never touched some of the instruments that they ended up playing in studio and in the videos. Furthermore, the quality of their performance was so exquisite that it positively surprised both Fogerty and his sons Shane, Kelsy and Tyler too.

Given the popularity of these YouTube videos and the joy and fun that the singer/songwriter was having in studio with his family, it didn't take long for Fogerty and his sons to convince themselves to put together a proper studio album of these sessions, called Fogerty's Factory. The idea of the album title came from the American singer-songwriter's wife Julie, an idea that recalled not only the title of the 1970's Creedence album, called Cosmo's Factory but also the cover of the record itself, with the Fogerty family in place of the Creedence Clearwater Revival members with the exact same layout of the 70’s album.

Fogerty's Factory is a real hymn to life and love for music, where Fogerty and family assemble some of the most famous hits of Fogerty's career with the Creedence, through songs such as Proud Mary, Down On The Corner or Have You Ever Seen The Rain?, for example, but also through some surprising and very intense covers by other artists, among which Bill Withers' Lean On Me and Arlo Guthrie's City Of New Orleans stand most certainly out.

John Fogerty, at the wonderful age of 75, still retains an incredibly powerful and mesmerizing voice and it seems that time has not passed for him at all. One of his most intense vocal performances of the whole album, even though it is impossible to find any vocal flaw at all, within the 12 songs included in the album, is, in our opinion, Tombstone Shadows, from the Creedence album of 1969 called Green River, where the American artist offers spine-tingling moments, through his vocal rendition of this Creedence's classic.

One of the many advantages of the record is that, deliberately, Fogerty and his sons did not make any studio alterations to what they had recorded live, therefore, that lo-fi sound emanating from the record, it is a sound that it doesn't only enhances the incredible vocal qualities of John Fogerty but also the multifaceted talent of Fogerty’s sons and daughters, who support their father through what it may come across as minimalistic, in terms of sonic layout but, nevertheless, very organic and exquisitely delivered.

Among the many special moments included in the Fogerty's Factory album, a truly deserved mention needs to go to the version of the song Centerfield. The tune, from the solo album of the same name in 1985, recorded entirely inside an empty Dodger Stadium in the US, on the occasion of Fogerty's 75th birthday, display once again a thrilling vocal performance from the American artist for one of, in our opinion, most important songs of his extraordinary solo career.

Fogerty's Factory is a record that fascinates and excites at the same time, as it incorporates an evergreen sound capsule containing sounds and songs that are able to attract the listener's attention from the beginning to the end of the record, through a remarkable sonic and emotional roller coaster masterfully chiseled by Fogerty and his family.

When Fogerty and his family released Fogerty's Factory, the singer-songwriter declared that the fundamental purpose of this record, it was that to share the love for music and family through 12 tracks that retraced Fogerty's whole musical life and career in its entirety. There is no doubt that John Fogerty and his sons have achieved that goal fully and in the best possible and entertaining fashion, through this remarkable record.

Fogerty's Factory is out now and it is available on Amazon