Gary Moore - How Blue Can You Get 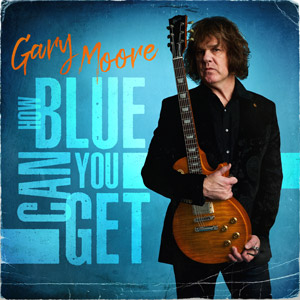 One positive aspect about archives of music artists sadly no longer with us, it is that of having, every so often, some undiscovered gems emerging under form of records, to celebrate a special circumstance related to the aforementioned artists.

It is therefore very fitting that, to remember the tenth anniversary of the passing of one of the greatest Blues/Rock guitarists of the last half a century, Gary Moore, the record label Provogue/Mascot Label Group has released a record of Moore's never before heard alternative takes, deep cuts and a couple of previously unreleased songs from the Northern Irish Guitar Maestro, called How Blue Can You Get.

The 8 tracks included in the record, together with re-instating Moore's undisputable musical ability and huge finesse in playing guitar, show also his impressive ability as a singer too, through a series of remarkable vocal performances, like on Love Can Make A Fool Of You (originally recorded by Moore on his 1982's album called Corridors Of Power), for example, Freddie King's cover of I'm Tore Down and B.B. King's How Blue Can You Get, among others.

Naturally, Moore's insane talent as a guitar player takes center stage on every step of this record, with the Northern Irish artist displaying bags of swagger on the thunderous Done Somebody Wrong (originally by Elmore James) or on Memphis Slim's cover of Steppin' Out, where the song assumes a distinctive Stax Records sort of sonic flavor, although the song was originally released by Vee-Jay Records in 1959.

Among the previously unreleased songs off Moore's own songbook, whilst the ballad In My Dreams, although greatly executed by the Guitar Virtuoso, suffers a little on the lack of that vocal punch clearly palpable on all the songs off How Blue Can You Get, it is the experimental Looking At Your Picture that truly intrigues and impresses, with Moore merging layers of Blues and Drum and Bass in a very unorthodox but highly effective and dynamic way.

By the time the album reaches its end with Living With The Blues, a poignant, musical letter to the Blues and its core values, executed once again with electrifying intensity by the guitarist and singer/songwriter, one cannot ask for a better and most apt way to close an album like this that doesn't hesitate to throw Blues and Rock punches of elegance, power and extraordinary artistic integrity at every stage of this splendid collection.

How Blue Can You get does not only remind us all, once more, how much Gary Moore's talent and musical vision has impacted and influenced millions of fellow music artists and music fans in general around the globe, throughout the years, but also how big his integrity, commitment and passion for music has always been. Ten years might have gone by, from his passing but the memory of Moore and his huge artistry will always live forever.