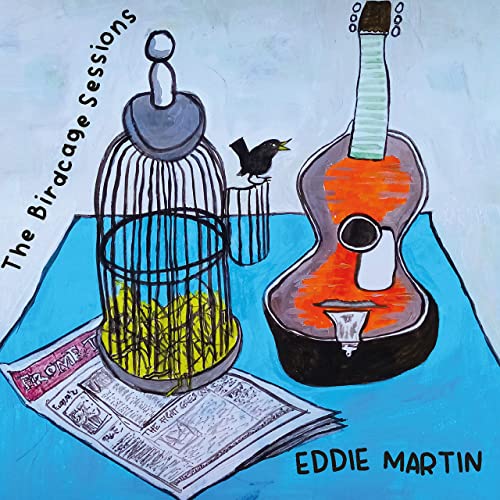 The last 20 months of the history of the world have been and still are, every day, very heavy on all of us, from a mental, physical and social perspective, particularly, on millions of gifted music artists, brutally deprived of their main income and forced to lock their creativity and power of expression behind closed walls.

For one of the most gifted British multi-instrumentalists Blues singer/songwriters of the current generation like Eddie Martin, this has been exactly the kind of life that, regretfully, the British artist had to face, day in, day out.

Martin, though, has used proactively this long-lasting lockdown, by learning the role of homemade sound engineer, improving his already highly impressive musical skills and, most importantly, writing as many songs as possible, as a way to reflect at the state of the world we are currently in and the way that this pandemic has affected all of us in every aspect of our everyday life.

The outpouring of all Martin's feelings, throughout the last couple of years, has generated a brand new album called The Birdcage Sessions, where the British guitarist and singer/songwriter displays, once more, strong lyrical acumen, fabulous musicianship and a series of highly impressive vocal performances exuding honesty, passion and great devotion for the Blues.

Whereas, sonically, the new album travels from Bristol in UK straight to the edge of the MIssissippi River, The Birdcage Sessions is very much a semi-acoustic record, for obvious reasons, due to the pandemic. Still, that aspect does not diminish in the slightest but rather elevates the core value of what can be easily defined as one of Martin's most inspired records of his career to date.

Whilst Martin, through the years, has constantly shown how phenomenally well he can play his Dobro guitar, The Birdcage Sessions gains an extra layer of emotional sincerity, especially by combining Martin's enormous talent as a guitarist with hugely captivating lyrics about nature, (which played the role of a calming valve for the British artist, especially at the peak of the lockdown period) or of a socio-political nature, where, on the latter, the English artist does not hesitate to draw, in no uncertain terms, the sheer fall of a world that is on the verge of  no longer recognising or appreciating the value of life and people.

Martin's new album depicts, undoubtedly, one of the most intense and emotional journeys that the singer/songwriter had to go through his life so far. A journey that, sure enough, it has been tough in many aspects but it has also, from an artistic perspective, completely paid off, by showing a very close and personal portrait of an artist at this stage of his life and career.

Every song part of The Birdcage Sessions album speaks clearly from the heart of the artist; from the opener Before We Wake Up, dedicated by Martin to the memory of Mississippi Fred McDowell and Son House (... Mad kings bark the orders, scapegoats are blamed. We're all looking over our shoulders, now the tide has changed. No saviour like an angel is gonna fall from the sky...), going right through some truly cutthroat lyrics, as in songs like Break Even Blues (...The world was wide and free, big enough for all our needs. White man came and drew his lines, just to satisfy his greed...) to get to the heartwarming, highly emotional performance of the only cover of the album, the instrumental Amazing Grace that closes the album, Martin's new record encapsulates enormous inspiration, musicianship and lyrical craftmanship of the highest level.

An unmissable record of remarkable artistic depth and beauty not only for a respectable Blues connoisseur but for every single music lover out there. The pinnacle of Martin's artistry and creativity unquestionably.