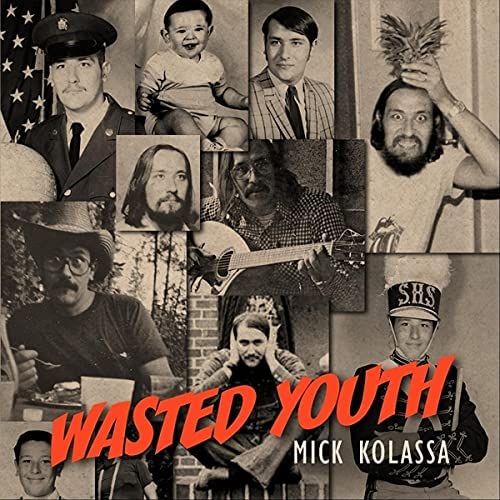 In these days and age, it is very gratifying for a writer to review a Blues album that encapsulates the original values of the genre so well like Wasted Youth, the brand new album from American singer/songwriter and guitarist Mick Kolassa.

Written largely during the height of the pandemic in 2020, Wasted Youth is a heartwarming, disarmingly sincere and incredibly well structured record in all its aspects, in a year particularly difficult for the veteran American Blues artist, from a personal level.

Kolassa joined forces, once again, in the making of Wasted Youth, with his personal friend and fellow hugely skilled artist Jeff Jensen, who provided, as he did on Kolassa's previous record If You Can't be Good, some truly great body of work on guitar, coupling up beautifully Kolassa's own enormous talent (among others) as a guitar player.

Just to give an idea of how much Mick Kolassa is loved and respected within the Blues world, you will just need to go through the list of Award-winning Special Guests artists playing on Wasted Youth. From Albert Castiglia on guitar, Tullie Brae on backing vocals, David Julia on guitar, Victor Wainwright on piano or Doug McMinn on drums, just to mention a few, Kolassa's new album is also the perfect demonstration of how strong the musical brotherhood run, throughout the whole of the record.

Wasted Youth is a sonically cinematic journey through the soul of a Blues pioneer that looks back at the events happening in the last 24 months of his life, events that have seen Kolassa going through some very difficult times, including the loss of his wife and some close, personal friends. Adding to that the need of downsizing his house and, as a consequence, being forced to leave behind some important memories in Kolassa's life, one can easily appreciate why the themes of loss and pain are often recurring into the lyrics of Kolassa's new album.

But then, of course, what better music genre than the Blues can help to heal emotional scars like the ones mentioned by Mick Kolassa, in the songs included in Wasted Youth? Because, when it comes to play the Blues, the traditional one especially, very few are able to do so as the American guitarist and singer/songwriter does.

Contrary to what some may think, to play Blues is not something related to the capability to play an acoustic or an electric guitar; Blues is an art form in itself. It is about a feeling that an artist is able to create, through the depth of a song's lyrics, the strength of the vocal delivery, the intensity of the guitar playing that walks side by side with the lyrical context of the song.

Wasted Youth is not only an outstanding album from a lyrical point of view but also under a musical perspective; Kolassa's guitar constitutes a fabulous tres-d'union between the soundscapes created by the American artist and the array of prodigious fellow Blues musicians accompanying him through the whole of the album. To our website, it is extremely important to underline that all the 12 songs part of Kolassa's new album, are individual gems of a priceless sonic jewel that cannot be separated, because each and everyone of them expresses in full the stature and the incredible talent of a modern times Blues Godfather like Kolassa.

Through the years, this formidable artist has released many accomplished records, always showing a true passion, commitment, dedication and deep understanding of the Blues genre. To our website, though, Wasted Youth stands out as the true masterpiece of Kolassa's career so far. Most certainly, one of the most inspired albums of 2021 to date.