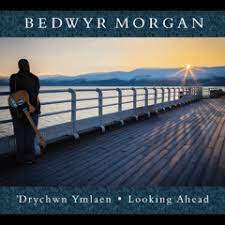 It's good to have the Welsh guitarist and singer/songwriter Bedwyr Morgan back on the music scene, through his brand new album called Looking Ahead.

Always an inspired and talented artist all around, Morgan has certainly used the forced pause from the music scene mainly dictated by the pandemic wisely, in the last 18 months or so, to gather together an album that symbolizes the Welsh artist's state of mind about the future and what does the future hold, not only for himself but also for Wales, his native country for which Morgan holds a strong emotional attachment since forever.

Through the brand new 8 originals written by Morgan, one can palpably feel the love for music at 360 degrees from the Welsh singer/songwriter, especially through the first three songs of Looking Ahead.

The opener You Broke The Promise is uptempo, borderline Hard-Rock, with some solid, muscular guitar riffs sustaining beautifully the artist's strong vocals and lyrical context within the song written by Morgan. Whilst the tune that follows, called Just A Memory, slows down the tempo considerably, in comparison to the album opener, on the other end it displays, in the best and most emblematic way, Morgan's many talents as a songwriter, a guitarist and as a singer, able to create, at the same time, powerful melodies, just like in this specific song.

There are a lot more interesting and inspired moments, throughout the record, such as in the instrumental The Fading Rainbow, a slow, atmospheric tune, where Morgan's guitar skills take center stage in great style, through a truly uplifting performance. A tune where also the solo from Tudur Huws Jones on low whistle stands out beautifully, just as the job made by Tony Parisella on bass guitar too.

Looking Ahead is an excellent step ahead to Morgan's self-titled 2016 EP debut and displays a talented musician willing to explore diverse sonic alleyways to express his musical vision with that great artistic integrity that Morgan has constantly expressed since Day One.