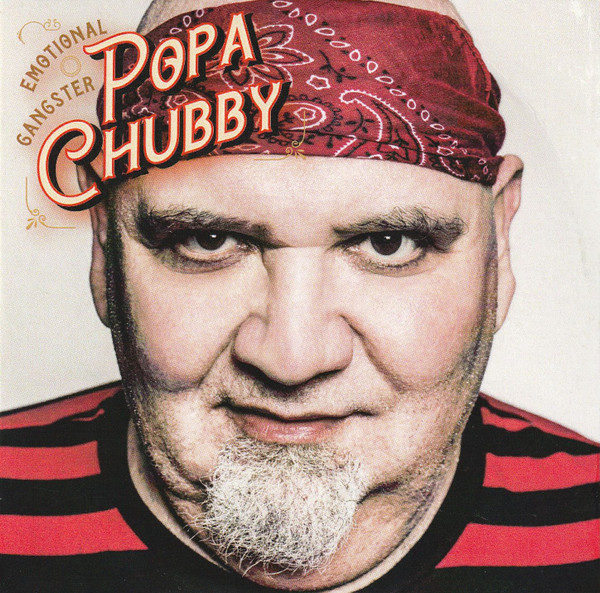 For quite some time, it was rather rare to hear and feel Guitar Supremo, multi-instrumentalist and singer/songwriter Ted Horowitz, a.k.a. Popa Chubby, as happy and extremely optimist about the future like he is on his brand new album called Emotional Gangster.

Traditionally, Horowitz is and he has always been very upfront, direct and honest music artist, when it comes to his inspired songwriting but sometimes, the overall feeling generated from some of his records emanated a little bitterness here and there, especially towards social and political injustices.

As Popa Chubby's new album may suggest, Emotional Gangster is a record that finds once again Horowitz wearing his heart on his sleeves, when writing songs but this time around, it feels like the New York-based guitar master has acquired a new found strength in himself, bags of hopes for tomorrow's world and love for life in general and, it comes without saying, love for his wife Mary Beth.

Emotional Gangster is also a statement, in some ways; a statement about Horowitz's undeniable love for Blues, to which he expresses his genuine passion and respect by covering two great classics, respectively Willie Dixon's Hoochie Coochie Man and Elmore James' Dust My Broom, the latter being one of the best cover version ever played in the last two decades of Blues.

Furthermore, Popa Chubby's new record is the perfect example not only of Horowitz's multi-faceted skills, as an artist but also it comes to show how great an album may sound even when said album is entirely "homemade", in terms of writing it, playing, producing, recording and mixing it.

For those who know a little about Popa Chubby's outstanding career, they will immediately feel the positive vibes exuding from a record like Emotional Gangster. Horowitz's songwriting is at times witty and slightly raunchy (Why You Wanna Make War), other times reflective (New Way Of Walking, Doing OK) and always sympathetic towards issues like gender equality and emotional troubles (Equal Opportunity, Fly Away).

Still, Horowitz's huge guitar playing skills and also, let's not forget it, his remarkably strong vocal range are at the core of the whole record. Through songs like I'm The Dog, Doing OK or Save The Best For Last (the latter welcoming Harmonica Master Jason Ricci as Special Guest), among others, Popa Chubby's artistic depth is unleashed beautifully at its best.

Popa Chubby's Emotional Gangster is not only the latest chapter about Ted Horowitz's enchanting career so far and a very impressive display of his artistry at 360 degrees but it is also the most exciting and uplifting version of Popa Chubby, man and musician that you have ever heard.