Eliza Neals - Badder To The Bone 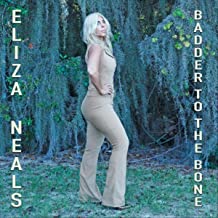 It has been a while since American Blues/Rock Powerhouse singer/songwriter Eliza Neals used to be the best kept secret in Detroit.

Now, after a series of breathtaking albums like 10.000 Feet Below, Sweet Or Mean and especially her 2020's Black Crow Moan record, we can safely say that the hugely talented Miss Neals has raised her artistic game considerably to the whole world, in the last five years of her career, showing a maturity in her songwriting and a remarkable strength and power in her vocal deliveries, placing Eliza Neals at the epicenter of Blues Regalia.

Confidence and talent are certainly two aspects that are no strangers to Neals' music abilities, something that emerges clearly into the singer/songwriter's brand new record, called Badder To the Bone, a record entirely produced and arranged by the artist herself.

Badder To The Bone delves deeply into Eliza Neals' musical roots, without sticking firmly to styles that she is hugely familiar with, like Contemporary Blues and Rock, for example, but instead taking a very interesting spin to alternative sonic alleyways that flow into genres like Gospel, Shuffle, at times even including elements of Rumba incorporated in the songs part of Neals' new album.

From a songwriting perspective, it is rather interesting to see the way Eliza Neals reflects on the consequences that the pandemic has brought not only on herself but to the whole world out there, especially through songs like the opener United We Stand and Lockdown Love.

Eliza Neals has also, once again, picked up the cream of Blues/Rock guitarists to play on Badder To The Bone. Together with Michael Puwal, who has often worked with Neals on past records, the artist from Detroit has invited also equally potent guitar gunslingers like Billy "JC" Davis and Lance Lopez, the latter, in stellar form on Neals' new album.

When it comes to Eliza Neals and her powerful voice, this extraordinary singer and songwriter never fails to deliver big on this album too, in particular on tracks like King Kong, Queen Of the Nile and Heathen, where her vocal performances are so remarkably intense and emotional.

Badder To The Bone represents another exciting chapter in the flying-high career of Eliza Neals, an artist that keeps on pushing herself forward vocally and stylistically with formidable results on each passing record. As clearly shown on another excellent record like Neals' brand new one.