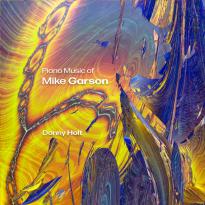 In many ways, it was almost inevitable that the one of South California's well respected and talented pianists and composers, Danny Holt, was going to immerse himself in the vast body of work of one of the biggest piano geniuses of this generation, Mike Garson.

Through a friendship that goes way back to 2004, at the time that Holt was still a graduate student at CalArts, the American pianist has carefully learned and studied Garson's compositions and the way Garson "feels" music and translate it in a very unique style. Furthermore, given the magnitude of Garson's musical vault, Holt wanted to be sure to select those pieces that ended up on the record to which he felt more inclined to, ensuring to translate Garson's music in a very respectful way still and maintaining his trademark playing style at the same time.

Piano Music Of Mike Garson is a true labour of love, an intense labour that was played and recorded at Garson's house, almost 7 years ago and was intended to be completed by Holt in 2018, when, very sadly and rather unexpectedly, Garson's house was completely burned down to the ground by one of Southern California's often recurring wildfires.

Thankfully, though, determination prevailed and Holt, very much encouraged by Garson too, managed to reassemble and re-record all the pieces he had initially put together, giving musical birth to a highly impressive record that captures perfectly that free-form compositional vision that Garson sees, lives and breathes within his music 24-hours a day.

The lengthy researching job done by Holt on this record, his personal tribute to one of Holt's living music heroes, pays off big time; the California-based composer tiptoes beautifully in some of Garson's homages to composers like Ligeti, Prokofiev and Chopin, among others, through that imaginative, erratic and at times poetically nervous style that Garson regularly showcases, although in different shapes, especially in his homages to renowned composers like the aforementioned ones.

One of Holt's big intuitions, while recording the Piano Music Of Mike Garson album, was to sonically explain to some listeners that may be not entirely familiar with Garson's vast discography, the many different sides to Garson's musical vision. In that respect, there are some really touching moments of absolutely effortless compositional beauty chosen by Holt to better illustrate the vastity of Garson talent, through pieces like Nocturne In B Minor, Butterfly and Gospel, among many more.

To choose some special moments in a record packed with class like this, it is an inhumane task to achieve, due to the artistic richness of the album. One of the many keys to the success of Mike Garson, through the decades, has always been and still is the way the pianist and composer is able to talk to people's hearts without singing, by simply letting his piano playing to do the job for itself. In that respect, Danny Holt was also very clever in performing, in truly sublime style, pieces that represent another emotional dimension to Garson's music, like God Speak, Contrapunctus and Tribute To David Bowie, to mention a few.

The booklet that comes with the CD is also particularly fascinating, because it reveals aspects not only related to the making of Piano Music Of Mike Garson but also to the whole learning process that Danny Holt has gone through to be able to produce a record of this magnitude.

Holt's mammoth effort to translate at its very best Mike Garson's musical career especially of last 3 decades, is a joy to listen to and a triumph for the American Virtuoso Pianist. Hard work and talent always paid off, a motto that Garson himself has lived on his own skin throughout his whole life and career, just as well as Danny Holt is doing right now, through this stunning record.