I have a theory, that indie punk rockers intuitively write great folk music. I've followed The Replacements to Paul Westerberg, had Grandpa Boy sneak up on me and then took in Folker among his other, more recent works. Langhorne Slim's drummer, Malachi  Delorenzo is the son of the drummer from the Violent Femmes. The punk rockers have the advantage in creating folk music because they still have raw lyrics in their heads and the phrasing that they do changes things up because that is just how they hear music. So when Matt Pryor, from the Kansas City band, The Get Up Kids, gave his catalog a turn for the acoustic and the harp. I was curious to review it and test my hypothesis.

I was right. The second solo album recorded on his own label, the opening song rocks. Pryor lets it rip with "Don't Let The Bastards Get You Down". Spare instruments highlight his vocals. The lyrics are genuine "stronger to have fallen and recover from mistakes. Some days I stumble when these words they have no weight, but I get up again."

The most important story about this album is that it is totally funded by Kickstart, a fan based support community that directly paid to have the album released. His fans were so enthusiastic about it, that the resources were available within a few days. Pryor had toured the world with his experienced bands, but to launch this album, he produced a series of house shows to thank his fans. The circular 'artist-to-fan-that-fuels-artist,' is evident in the creativity. Yet from this energy, Pryor made an album that offers deep hype free reflection.

"The Lies Are Keeping Me Here" add a soaring guitar which parallels the red sky references and introduces some harp to the mix. He belts out a great tune on this one and has some harmony support. Up tempo "Where Do We Go From Here" moves the album along, and makes a great indie single in my opinion. I was waiting for some darker tunes on this record and wasn't disappointed. "Like A Professional" fit that bill as well as the lyrics of "As If I Could Fall In Love (With You) Again." It's all over but the shouting. The Dylan harmonica sound is present, but the mix is all Pryor. The biggest surprise to me in this song was hearing a hint of similarity between Pryor and Lindsay Buckingham on the bridge of this tune. Yes, "Oh please leave me alone." had an earthy calling from behind the picking guitar, soft wailing sound the echos, and a pining rocker voice. Yes, Pryor sounded like that, I call it like I hear it.

My favorite tracks on the album are the centerpiece "Polish the Broken Glass" and the dreamy "As Lies Go ... This One is Beautiful."  Broken Glass has a magnificent flow to it and self challenging lyrics to balance it out. As Lies Go is soft and melancholy in the soul search of 'hunger and hope'. Who hasn't been a fool for someone sometime in their lives ? Who hasn't been unable to keep their temper in tow ? Deskilled for words ? We have all felt that way. But Matt Pryor seems to find the words for us on this album.

The summer bug sounds on the last song remind me of the hints of the Zebra Ranch on Keys To The Kingdom from the North Mississippi Allstars, the tribute album to Jim Dickinson. All of them punk and Alex Chilton fans, by the way. With a comforting and transcendent mood, Pryor wraps up the album with success, bringing his edge experience toward a forward thinking type of folk music. 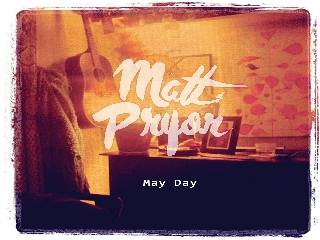