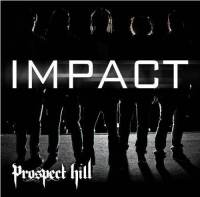 "This is a revolution, just give in to the dream. Expect to play for keeps.

It's all within your reach !"

Prospect Hill is a metal band from the Merrimack Valley, north of Boston. Their bio includes credits of production with Anthony J. Resta (Collective Soul, Duran Duran). "They have been nominated and won numerous awards over the years, one including High Times Magazine’s Best Independent Act of 2010 resulting in them performing The High Times Magazine Award showcase in Austin, TX for the 2010 South By South West Music Festival."

Everything about this record, from how the title captures the essence of the songs, to how the songs are put together with short instrumentals between some tracks, shows solid musicianship, creativity and completely rocks. There is not a bad song in this set. The guitar is strong with powerful productions, Fithian's vocals bring weight to this already heavy band. Lyrically, the words on the IMPACT page are well written, reflecting relationship realities, life exploration and human resilience. The message of this entire project is to "Come Alive" and fearlessly face the future. Don't settle, second guess or cower to the mundane. Prospect Hill's IMPACT will hit you like a ton of rock bricks, waking you up to see the potential of your dreams, it has the force to move you. Will you let it ?

This band is cohesive. The songs are arranged to reflect the meanings and lyrics. Opening tight and strong, Townie is paced to describe breaking out of the trap of being stuck in 'forever this town'. At the end, Fithian frees the vocals with passion. There is a short instrumental piece at the fade out which blurs into the next song.

Sad and slow foreshadowing is the intro of Reflections. The ambivalence of relationships is not easy to grasp in words or music. Each piece of this work is aimed at the heart of the real world questions of closeness. The arrangements build steady as the story unfolds. I love the drumwork on this track, the way that it changes and the subtle accents you hear when you really listen. There is a moment where everything is clear, "these feelings I can't explain overwhelm me, so I leave." And then the song crashes on full force.

Anthem rock. The guitar is loud and gritty along with the bass that beats out the steps of the eminent good bye that is raging in the story of this song. This is rock that never turns back.

There are cool instrumentals between some of these tracks that blend them into great transitions. They are dark and set the mood, without being too weird or screatchy. The guitar work on this solo soars.

This song is the centerpiece of this album. The video of this track is taking off in the media. I like the song better ! It does sound like a movie soundtrack, the phrases and changing tempos definitely tell a story. What I love about this whole album is the challenge to face your life on its terms. This is the message of every song, there is no compromise.

Great solos open this wide to invite the vocals on a high note. Rock ballads are great when they balance loud with meaningful. My only critique of the entire album is that in this song some of the lyrics are a bit buried by the instrumentation. The words are so well written, they should be heard. Still, the track rocks !

One of my favorite pieces was Time on this album. It starts with guitar riffs and a great bass beat that approaches wisdom and questions. "We all fall down, down the stairs of time, the curtain calls, will you be satisfied?" The harmonies and rhythms keep pace as the story weaves in and out of the refrain to tell the tale to which only we know the ending. Then during the bridge, there is a tempo switch with some interesting percussion.

This is my all time favorite track on this record and the type of song that would make me go out and by more albums from Prospect Hill. It is an in your face statement of courage to pursue your dreams without question or fear of risk. The guitar and drums blow through the roof, intense at the end, then the song stops on a dime and you are on your own ... (whooosh!).

Instrumental to close the album. This one sounds like wind.

In this third effort of albums Prospect Hill did not disappoint. The band plays their music with loud courage, showing raw talent,  which is the same message they communicate to the listeners. Be real. Face who you are and never hold back in living life to its potential. Hope rescues from despair. With solid productions, great musicianship and meaningful lyrics, "Come Alive !" Let this album have IMPACT !