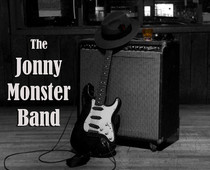 This album shows up without much fanfare. In good blues, less is more. Ten tracks, three musician credits and a sleek, bold presentation makes for a record that slips right into blues history as if it's been there all along. There isn't even a date on the liner notes. This is a timeless blues production.

An advantage of current blues artists is this: Modern transportation and transmission of information means the regions of blues sounds are no longer separate. The Delta has been heard around the globe. Windy city Chicago blues are translated to other regions, tweaked and jived into jazz as contemporary sounds reflect these roots. Electric blues masters don't own this sound, but when they play it well, we hear its signature style. Musicians writing today have grown up on these tones and probably hear them in their sleep, or at least that's the case for Jonny Monster and his band from Kingston, NY.

All songs written by the Jonny Monster Band

Except "I Got Your Letter" written by Jonny Monster

I interviewed Jon Butcher Axis and Charlie Farren last year. One thing they said is that they hope the next generation of musicians will continue to play real music with real instruments. It seems like such a common sense thing, but today, with so much technology available, it is an art that must be prioritized.

I've heard Jonny Monster Band's album several times and watched a similar amount of their video footage. These artists are the real deal. Their record covers a great span of sounds from Mississippi grit, British blues rock and straight Stevie Ray Vaughan tones. For Jonny Monster Band, their studio recordings seem easily matched in live performances because they are real musicians playing real music, in real time. This is what makes history. This is why Muddy Waters and Elmore James are still talked about today, because the music was between the artists and their instruments. They could play anywhere.

The song, "Bad Cream" is an example of how Jonny takes the "feel" of the blues and incorporates it into his own life experiences, something that comes from his heart, as most of the masters have done over time. Other listeners have said he projects the idea that "you can't play the blues until you've been there yourself," because he openly struggles with problems and life's troubles in the lyrics and the moods of the songs.

I'll admit, I like a clean sounding guitar in blues records. I enjoy hearing the notes because they come on so fast, I need a little space to wrap my brain around them. Jonny Monster Band is right there in my categorical head because he shows promise in this area of precision. But the recordings are raw. You can hear the strings, the echo of the drum cymbals, and the grit of the instruments when the notes are bent. The listen is authentic and enjoyable, because he communicates that it is not just the notes, but the atmosphere the record creates when it spins which is important.

What impressed us with this disc is that Jonny Monster Band goes from mellow acoustics to rocking slide, and then all out jams with seemingly effortless talent and passion. Much like Willie Dixon's work alongside Muddy Waters, a great blues band benefits from solid bass talent. Jonny Monster has the right musicians in place to get the point across without being overproduced.The vocals, bass lines and drum work show talent with mastery of the overall blues sound. The arrangements of some songs, such as "Whiskey and Smoke," have a rhythmic undercurrent. A little black magic comes through with a Santana vibe in the song 'Succubus'. The start of it makes you take a double take and really tune in. Monster keeps the steady pace of his own style, which sets him apart toward a signature sound.

"We Could Rule" starts off with a hopping groove that brings you in to confident, engaging lyrics. It has some Hendrix/Page psychedelic distortion going on mid-song that spins out til the end. It is fun and eclectic without being too self indulgent. Well, maybe Monster shows off just a little, but this blues band is good. He uses this song to blare out what he's got - give the guitar devil his due.

Recorded by Rob Kissner at the Dr.'s Office in Kingston, NY

Produced and Mixed by Jonny Monster and Rob Kissner

For more information about the Jonny Monster Band, click here.

~Many thanks to Front Row Dave . His great footage of JMB is here.

~And similar gratitude to Mick Houser and Doc Friedenson for their continued education about the blues.