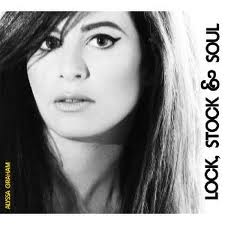 From the New England Conservatory of Music, where she studied voice and contemporary improvisation, Graham found her inspiration in the classic 1960's folk rock of Neil Young, Nick Drake, and Bob Dylan.

This album opens with raw acoustics and a breathy vocal. "Til My Heart Quakes,' quickly transports you to a dream. Guitar and piano accompany the piece and it closes to a medley of gentle production. Graham recently partnered with Huffington Post to premiere her latest music for the song "Til My Heart Quakes":

Folk followers of the purist kind will like the melodies that travel though this album. There was a hint of Cat Stevens guitar work in the start of this second track, "I Know" and the bellow of low tones with keyboards and percussion keep the song warm. I hear what sounds like a harp at the end of the song.

"Exploded View" is the centerpiece of this album. It is a flowing track with a wide range of pickups and tempos, while still keeping the softness of her voice. Throughout this record, Alyssa maintains her voice on a high note, with full rounded tones.

If you want to be on the cutting edge of new music, follow Robert Plant's CD collection, especially the one in his car. When choosing recordings for his Band of Joy record that was released last year, he highlighted a love for 'slow core' music. "High Time" is an example of how longer notes, melodies and extended instruments carry a song to push the limits of sound, which makes the listener attend in a mindful way. Alyssa is the only lead vocalist on this record, but I can imagine another set of artists doing this song in harmony, much like Plant did with Patti Griffin.

The soul influence comes out in "He's A Lover." Van Morrison has been a pioneer in blues and soul and I could hear some of his warmth in this song. The background guitar and bass bring a quiet ramble that swells and falls.

"Round and Round" is a quick ditty that paces literally round and round. It skips along into the skies like a sweet lullaby. I think she could push her voice a bit more and still keep the spirit of the song, the range is tight on this track.

Flexibility of the self to follow the search for what's important is the message of "The Last Leaf."

"Ain't My Kind of Boy" has a swift lyric with a sleek modern presentation. This was one of my favorite tracks.

A bit of harmony comes through in the dawn of 'I"ll Stay With You." Nick Drake has been named as influence for Graham. His work is a favorite of mine, as is Bon Iver. Both seem to be undercurrent styles in this track. This has an ethereal keyboard piece mid-song.

"You're The One," breezes through with reassurance and brings stability not only to a lyrical relationship but to the album as well. It settles the foundation to a lower tempo and soulful vocal. Alyssa Graham has a beautifully sweet soft voice in the higher keys, but I like her best when she uses all of her range.

"Lock Stock and Soul," the title track, is hidden way at the second to last song. The theme is a blue relationship and the memories that are reflected on as the realization of the end is near.

The thrill of love is taken to "Tidal Wave," but not in a crush, more a slow rush. The Norah Jones flavor of production is evident here, with jazz notes flowing through complimenting and highlighting Graham's voice, again in a wider range, which lends interest to the song.

"Lock Stock and Soul" has great instrumentals, angelic vocals and whisper lyrics that make bold statements about  love, life and the strength of identity. It is a mix of soul and folk with jazz influences, but to me also follows the intense genre of 'slow core' a favorite of Robert Plant's. Alyssa Graham will drift into your music collection with elegance and grace. Once she is there, the songs make you feel like anywhere is home.

For more information on Alyssa Graham visit her website.

iTunes named Alyssa Graham one of their "New and Noteworthy" singer-songwriters. Paste magazine admired her "moody...wide-open and raw" vibe.