Dan Waldman via Made of Wood: Chill Funk Trip

Dan Waldman is an accomplished pianist. After a move from Worcester, MA to Alberquerque,NM, he dug into his vault of instruments and tribute tracks, turning out a mod techno record that is fused with jazz inspired old school retro funk. 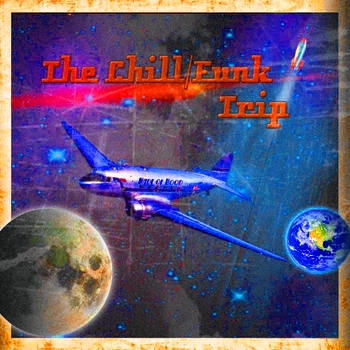 This eleven track collection of original works spans a wide range of soundscapes. Waldman purposefully creates a mood with every song that is different, yet connected from the previous track. For example, you can hear what sounds like the scratch of an LP at the start of the first track. This brings you back to real LP's with album covers and true instruments, reminding you there is a real musician behind this technology. The flow of these songs bring you not only to the places that the Chill Funk Trip want you to go, but also to places you've been before.

Lux hotels with modern music in the lobbies, spa retreats with relaxing meditative atmospheres come to mind in the first two tracks of this album. But as the pieces unfold, Waldman gets funky and tributes to his old school jive which makes the album even more enjoyable. This isn't exactly Zen music, or maybe it is for people like me that need a groovy chill, but have a background listening to Issac Hayes, Curtis Mayfield and Stevie Wonder. People like us need bass in our music lives, multiple instruments and structure to the instrumentals we hear.

One of the great aspects of the television shows of the 1970's was the soundtracks behind the action. This album could be a musical score for a science film, police investigation or any documentary really. It keeps the listener subliminally interested in the music, while allowing other thoughts to emerge.

Electric Funk Break for Addy was my favorite track. I loved the flute and the walk along bass line that traveled throughout the whole song. It is a familiar sound to me, growing up on Shaft and Baretta, but brought up to date with more instruments and contemporary arrangements. The organ work is awesome!

Chill Funk Trip is a collection of fusion works with a funk, jazz influence. The songs can accompany any atmosphere or activity with a mood set to keep a groovy vibe humming along as Walden spins out his talented instrument knowledge to new dimensions.

Dan Waldman, the artist behind Made of Wood, is an accomplished pianist and composer, having performed both solo and with bands in the Boston, Albuquerque and Baltimore/Washington areas. Additionally, his music has been performed by others starting from when he was 16.

In 2010 Dan created Made of Wood, an instrumental project that integrates a variety of styles to find a unique funky, but chill sound. The music is created using a range of acoustic and electronic, live and sampled sounds. Many of the sampled sounds come from alterations of his own performances. The inspirations for the sounds are huge and varied- ranging from Radiohead and Air to the Meters and Parliament Funkadelic.

On Feb 1, Dan released the album The Chill/Funk Trip. The album has led to Made of Wood being labeled a “Top 10 Emerging Artist," (Jango.com) and the album itself has received glowing reviews.

In his own words:

I'm hoping the music takes you to a cool place. Sometimes that place is funky, sometimes it's spacey, but hopefully the album is a cool ride start to finish, and you might feel like you're riding that plane from the album cover, sailing beyond the moon, to who knows where.

Here's the finished track "A Sleep and a Forgetting" where you can hear the saxes in their final form. This song uses almost everything I could come up with and was the last one finished on the album: a Wurlitzer organ, the Hofner, drums patches from a few different sources, synth sounds from an amazing thing called Synplant, some clavinet to keep it funky, and other synth and percussion sounds from about 5 different places.