Founded in 2008, Green Line Inbound (GLi) is a Boston based techno-hip hop band. They cite influences of Wiz Khalifa, LMFAO, Snoop Dogg, and even Dr. Dre. There is a modern R&B sound to their dance-party-pop form, and the influences are clear. Playing throw back favorites, old school hip hop, and running the edges of contemporary pop, the "wow" factor has been evident with this band that is collecting fans with every event and growing in popularity. Plus, these hard working crunk blasters use their cover bills to self-manage the finances of an original EP that was released this year (2012). They are now playing a mix of original work and house party jams. They've played at the Lansdowne Pub in Boston frequently and currently have a regular gig in Newport, RI, at One Pelham East, as well as other venues across the region. Catch their live act at a club near you! They may not be 'local' for much longer!

GLi started out as 5 college kids in Boston playing basement keg parties, and have since been the recurring weekend soundtrack to student parties and campus events at more than 10 schools along the East coast. GLi’s catchy hooks, fresh looks, and in-your-face live presence has earned them opening slots for a number of national touring acts and headlining shows at The Melody Tent, The Middle East Downstairs, and the Central Pennsylvania Festival of the Arts. The band most recently released a 2012 DIY Mix-tape of self-released original songs, and is continuing to perform live extensively throughout the Northeast. 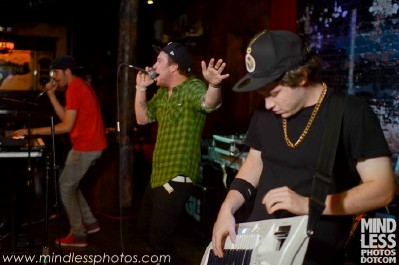 Rare Breed (drummer) in a recent interview with MindlessPhotos stated:

"We are a live band, so putting us into the pop, hip-hop genre of the mainstream music today doesn't really fit . We're also not really a rock band.

We make people dance all night."

We Know You Wanna- Summer is coming and so are the hot tunes. I can hear this one on a car radio cruising out to night life or blaring on a party playlist. There is an intense bass line that never lets up. It has the right balance of dance, hip hop and energy to keep any party going.

Mars- An original idea with a unique opening that starts with a space center announcement. There is a soaring quality to the introduction and the vocals contrast each other. The story of strained love and passion comes through, a space aged love worth saving.

To The Stars- This has a direct beat to follow throughout the track with a little re-verb, but not so much to distract from the song. The slow jam shows their R&B side and lends a smooth flow to the EP, but keeps the people moving. "Cause they all fall apart in the end. We were made to drift away."

Chemical Feel- Starting off meditative and changing up into a quick lyric, this contemporary track alternates streaming vibe beats with structured phrases. The composition of the song reflects the words it's trying to express. The background vocals and bridges are unspoken thoughts while the front end lyrics are more straightforward. How do you know if that chemical feel of new love is real? And even if it is, will it last?

One thing that will last for sure, is the house that GLi is building on sound. This band tunes in to their listeners, yet keeps their own dreams and creativity close, so that their set never gets boring or dated. All the while they are planning and moving forward with their own musical vision. Real musicians playing real instruments, writing their own songs and pushing the genres they love forward to blaze a trail of their own. Take them to the stars, Mars awaits! 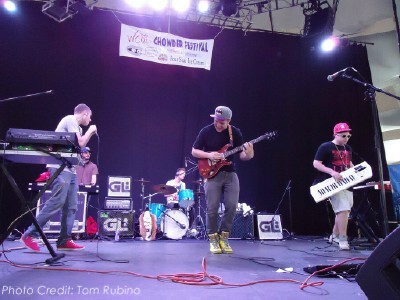